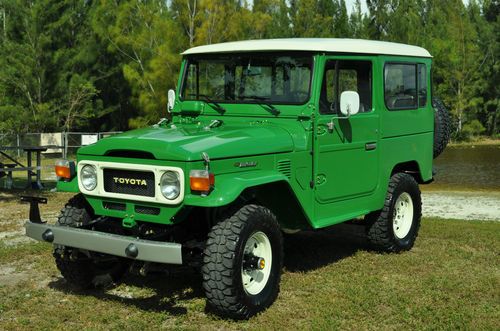 Back in the 1950's the american army contacted the Toyota Motor Corporation with a request for a 4WD vehicle to be used by the soldiers and military police stationed in Japan. Toyota took the request seriously. The result: the Land Cruiser, a literary bullet proof vehicle.

Any one who knows and understands the Toyota FJ40 Land Cruisers, realizes that the 1983 FJ40 is the "Holy Grail" of the FJ40's. This 117.000 Kilometers (73K Miles) original mile has been lightly used over its 30 year life span. It is a very complete example of the famed Toyota Land Cruiser line. As the photos show, this FJ40 has not been altered and is in very nice original condition. It starts easily, runs perfectly and is very strong cruising at 65 - 70 mph with ease. This FJ40 is a dream off-road machine and will satisfy any vintage four-wheel drive enthusiast.

As described this FJ40 is stunning and turns heads wherever it goes. This model/year is the last one imported and rarest with only 300 brought-in in 1983.

I imported this vehicle from Colombia (South America) and had it professionally painted by one of the most recognized classic car's restorers down there.It was painted inside,outside engine compartment and underneath. The vehicle was kept in original condition. I just added A/C bought at Cool Cruisers in Texas.

Doors shut tight and do not squeak or rattle.

The bottom of this truck is completely smooth,painted, and ready to shown with mirrors underneath.The frame is completely painted, floor pans are painted, smooth and waxed. Please email with any questions or for more photos.

This classic vehicle is being sold as-is,where is,with no warranty expressed written,or implied. The seller,Immaculate - Land Cruisers have described this vehicle to the best of their knowledge and shall not be responsible for possible missed items or description discrepancies, and makes no warranty in connection therewith. Any and all descriptions or representations are for identification purposes only and are not construed as a warranty of any type. It is the responsibility of interested parties to arrange for and pay to have this vehicle thoroughly inspected to their satisfaction within 24 hours prior to the end of bidding. Seller assumes no responsibility for any repairs or liability.

Please bid with confidence, I reserve the right to end the auction early (Vehicle is being sold locally).

Thank you for looking.