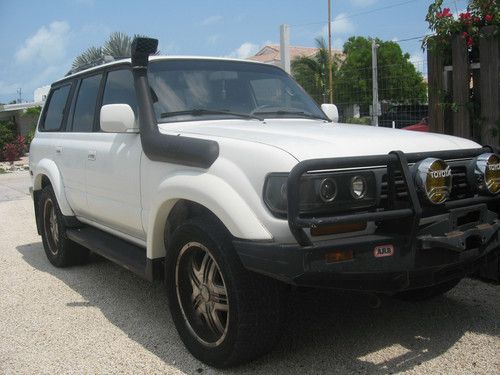 Condition: Used: A vehicle is considered used if it has been registered and issued a title. Used vehicles have had at least one previous owner. The condition of the exterior, interior and engine can vary depending on the vehicle's history. See the seller's listing for full details and description of any imperfections. ...
1996 Toyota Land Cruiser
The interior rear seats have been removed and discarded. The two front seats need to be re-skinded they are hard and worn. Always starts, has a little blow by from a hose leak fix. There is a K&N Air cleaner installed along with an ARB Safari Snorkel and the ARB Front Bumper winch mount that has a set of Japan Toyota Fog lights. I installed a one piece Head Light set and have the originals for the winner. Well over three thousand dollars in aftermarket I put on her, if you need to know.
This vehicle has never been under fresh water or salt water, It has been driven very little the last three years but she always starts, The alternator light comes on and off.