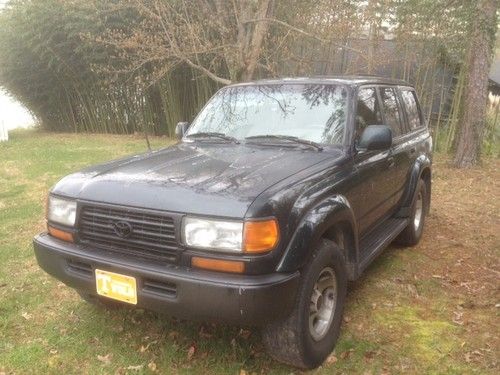 This is my 1994 land cruiser, I have owned it since 1999 and now am selling it due to a blown head gasket that I cannot afford to fix.  There is no visible body rust and only a single dent in the rear lift gate (see pic). The transmission was rebuit around 70k ago and I had just replaced the distributor, wires and plugs and most of the belts about a month ago.  Rear tires are almost new - Michleins and the fronts have about 30k on them and the spare is very good.  The stereo was replaced with a new Jensen head and all new speaker (it blasts!) with aux cable for an iPhone. The body is in overall good shape but the paint on the hood and roof have lost their gel coats.  The sunroof works well as does the power windows and mirrors. The A/C works very well with flush last summer. This has the shift differential lock option and third row seats and a high capacity tow hitch.I truly loved this thing and it is a tank...you can pull almost anything with it. The full time AWD is awesome and I never feared treading in any snow depth. Pick up will need to be arranged by buyer.  There is no warranty and a $200 PayPal deposit will be required.  Please email or call with questions 865-805-8205.