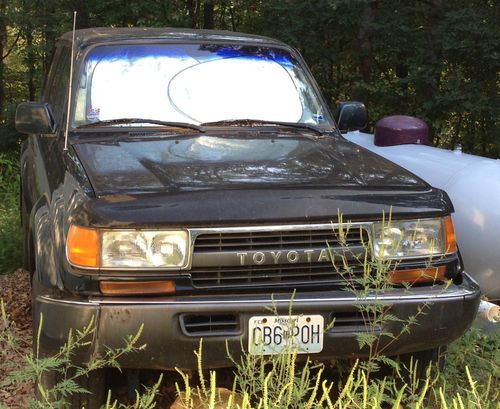 Condition: UsedA vehicle is considered used if it has been registered and issued a title. Used vehicles have had at least one previous owner. The condition of the exterior, interior and engine can vary depending on the vehicle's history. See the seller's listing for full details and description of any imperfections.Seller Notes:"Head gasket leak, engine disassembled to install new gasket but never finished - does NOT include a new head gasket kit. Some rust and a few dings. Leather seats have wear and some tears."
I purchased this vehicle new in 1993 and have loved it ever since!
The best 4 wheel drive vehicle I have ever owned.
That being said, after only 246,000 miles, it developed a head gasket leak so I disassembled it and promptly ran out of time to fix it.
A local garage said they would complete the job for about $600 but I decided not to hassle with it and just sell it as is since this would make one awesome project vehicle for enterprising individual.
My two sons were thinking about doing the 350 chevy conversion on it, but they are both in college and have no time either.
So here it is - under 250K miles with a head gasket problem ready for you to make it into something!.
One thing to note is that I replaced ALL the lubricants in all components with Amzoil synthetics at the 15,000 mile mark and there were no issues with transmission or any other drive train components at the time I put it on blocks.  there is a few dings and some rust, but not too bad (see pics).
This item is sold "as is" and no returns allowed.