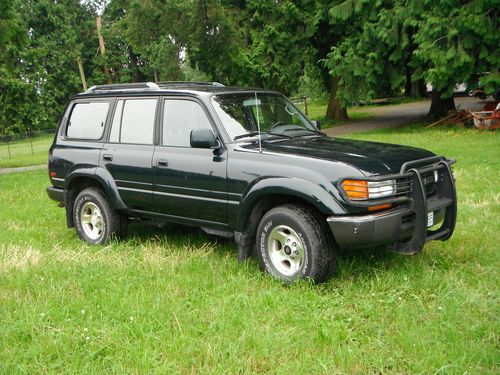 I recently purchased the landcruiser with the intent of building an expedition vehicle, but plans have changed.  The vehicle has 277,000 miles on it, but is in overall descent shape for a 20 year old SUV.   Green Exterior with black leather seats and Charcoal gray carpet.  There are no major dents in the exterior; however, there are many nicks and small scratches in the paint as shown in the pictures.  The leather is in pretty good condition.  Drivers seat stitching has come loose on seat panel and seat corner.
All fluids have been recently changed, brakes checked, etc.  The primary issue with the landcruiser is the EGR valve circuit.  The landcruiser runs a bit rough when cold.  The check engine light is on, and I've had it scanned and it gives an EGR code.  When the engine is warm it runs and idles fine. I don't believe it is a major issue, and there are several online forums dedicated to bypassing or giving alternate fixes for the issue.  When the vehicle is warm it drives fine and everything works as expected.  4x4 shifts easily and works properly. These were built very well like most Toyota products and I expect it has a lot of life left in it.
The Landcruiser also has a Brush guard and Towing package.  I wouldn't hesitate to drive it several hours, but I'd recommend getting the EGR valve issue sorted out.  My reserve price reflects the problems listed.