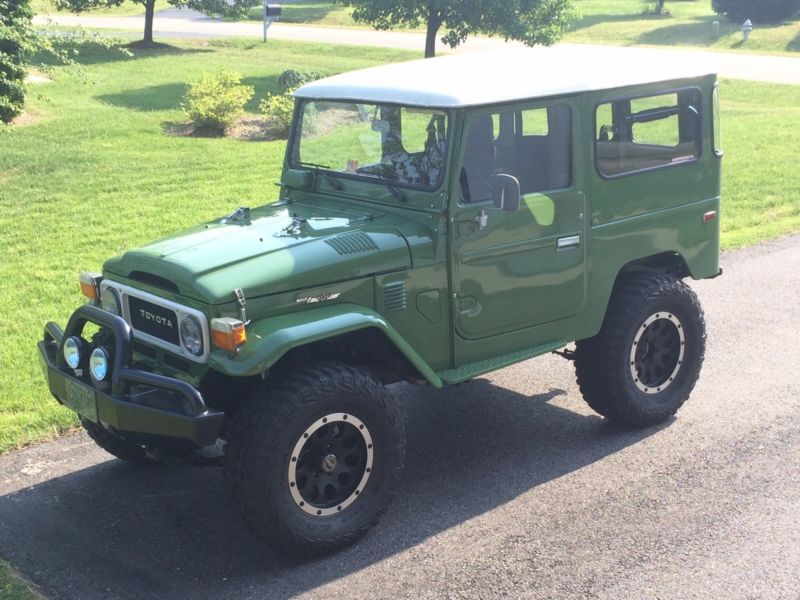 2F engine, de-smogged
Factory 4 speed
Rare Factory Power Steering
Re-geared
Lifted 4” with 35 x 12.50 r 17
If you are looking for a restored, high end custom built Toyota FJ40 Land Cruiser, you have just found it! This
FJ was professionally repaired using new sheet metal components (where needed) from Cool Cruisers of Texas.
Professionally installed and custom painted, interior has bed liner in black and New custom Mastercraft Baja seats
and a Tuffy center console. Everything on this build was completed in the last 2 ½ years, many components were
replaced with new parts or rebuilt to perform like new. The truck has been driven very rarely since completion.
This is one of the more stunning FJs you will see. The Body is super straight. The Paint color is a 1978
Porsche Green. The panels of this FJ were painted on the outside as well as the inside…giving a complete color
change. Both fenders & aprons, the hood, rear ambulance doors, etc. were removed from the tub when painted, as well
as all glass was removed. Re-assembly included stainless steel hardware.
Mechanical upgrades include new battery, many engine gaskets, belts, hoses, new starter, new alternator, new
braking system, re-built factory power steering system, new PS pump, complete new cooling system (including water
pump, hoses, & heavy duty diesel radiator) the fuel system (including removing tank to inspect and clean, new fuel
pump & lines where applicable, re-built factory original carburetor, etc).
Drivetrain upgrades include WARN locking hubs, 4” suspension lift with all new leaf springs & Biltein 5100
shock absorbers. The FJ40 has been re-geared to 4:88 with new ring and pinions and master install kits, both axles
have been completely gone through including front knuckle ball re-builds. The truck also features stainless braided
brake lines & all new power brake system front and rear. Other upgrades included new U-joints in both drive
shafts, all new suspension bushings, all new steering components, and all new fluids throughout. In addition, this
is a rare factory equipped power steering model, and the factory box has been remanufactured
The FJ40 is fitted with 17” ATX Slot simulated bead lock alloy wheels in satin black and Goodyear Wrangler
MT/R + Kevlar tires in a 35x12.50 R17 size. The axles have 1.5” wheel spacers to widen the track width and make
the stance look great
Interior was kept very authentic and original where possible. Interior upgrades include new door panels and
hardware, reclining Mastercraft Baja seats, Tuffy center console with stereo provisions, new shoulder belts, bed
liner floors, & Weather Tech rubber Floor Liners. In addition the hard top was fitted with a new headliner.
Body upgrades include sheet metal repairs and replacement on the back ½ of the tub as well as the back of the
frame. New Factory Toyota lighting and emblems were used.