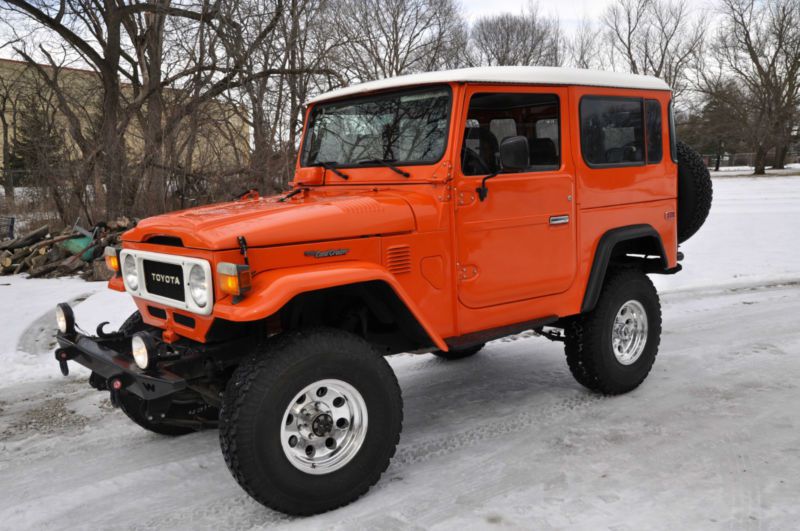 If you have more questions or want more details please email : tamekiatddeitz@ukfamilies.com .

Under the hood is the original 2F engine with factory emissions removed. The stock carburetor has been replaced with a Weber carb combined with a high performance DUI (Davis Unified Ignition) distributor and headers which gives her more power than most! Her previous owner(s) maintained her well.

She has her original 4 speed transmission with 3.70 gears, OEM axles with a Skyjacker 4" suspension lift, Rancho shocks and steering stabilizer. Under it all you will find 33x10.50 BF Goodrich AT's wrapped around Pro Comp polished aluminum wheels and Aisin freewheeling hubs. You'll be able to light up the trial with Auxiliary lighting mounted up front on the Warn front bumper and a bright spot light mounted under the bumper in back.

The interior is well sorted. Both OEM front seats and rear jump seats have been reupholstered in black vinyl, the headliner has been replaced with factory correct material. The dash pads are all in great shape. The roll bar is totally padded with coverings from Specter Off Road. Between the seats you have a Tuffy locking console. Audio is powered by a dash mounted Kenwood AM/FM/CD with Aux In and Remote. There are speakers mounted in front and rear.dr

Turn signals, headlights, aux lights (interior and exterior), wipers, taillights, backup lights, license plate lights, side markers and all gauges work. The 33x10.50 BFG tires and Pro Comp wheels are new. This old school 4WD serves up an awesome combination of off-roading prowess. Front disc and rear drum brake combination will bring all you to a quick and uneventful stop.

She comes with a treasure trove including Steel Half Front Doors, Rear Barn Doors, Owners Manual, Toolkit and a full compliment of Maintenance Manuals. Everyone loves this FJ40. It's bright, beautiful, tight, rattle free and capable. It would be right at home at the malt shop or perched on a mountain conquering your weekend adventure. If you're looking for a cool classic that's fun, unique and ready to hit the road, this is it!