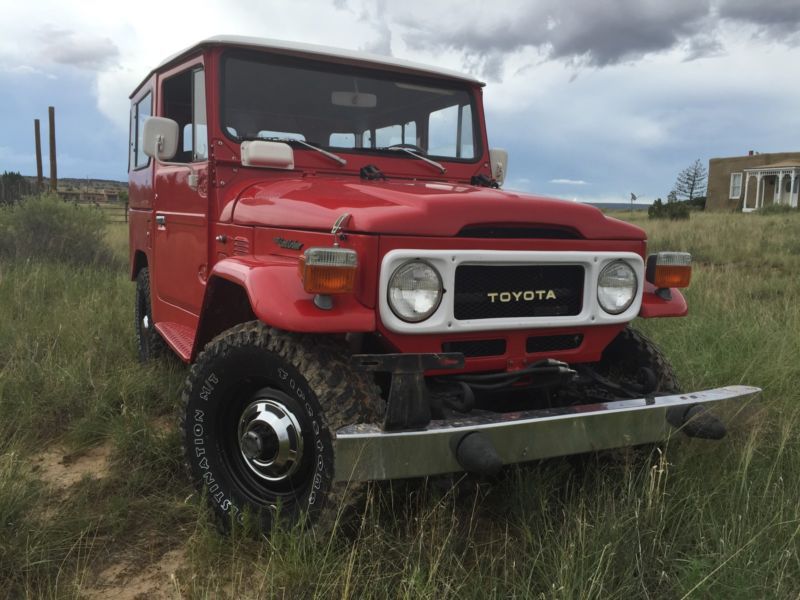 Up for auction is my rare in the U.S. and absolutely beautiful 1980 BJ40 Toyota Landcruiser with 4 spd manual and
2B 3.2L, indestructible Toyota Diesel Engine. The odometer currently shows approximately 150,000 km (turned over
once) which comes out to approximately 93,000 original miles. This may change because I do drive it some for fun
and because it is the most reliable vehicle I own. The truck has absolutely no rust anywhere and was resprayed in
its original Toyota Red color in 2014. This was a frame off repaint and the truck had very little rust at the time
so there was no need to replace body panels-just to primer, sand, and paint. The paint job is not perfect, but it
does look beautifully renewed and shines in the mid-day New Mexico sun. The instrument cluster, seats, switches,
wiring, door lock hardware, windshield wipers, windshield sprayer, fuse panel, wiring, taillights, license plate,
axels, transmission, frame, motor, and various other parts are all original. Some of the ancillary accessory parts
such as turn signals, hood latches, sun visors, and some other wear items are replacement items sourced as Toyota
OEM, mostly new old stock, sometimes used. Comes with a Toyota Landcruiser original 3-piece floor mat for the front
seats.
This truck has been sorted and gone through and it drives and rides great. It sits at the original ride height on
original leaf springs and shackles. The shocks were replaced at some point in the past. The wheels are Toyota OEM
15" steel wheels with Toyota hubcaps. The tires are brand new as the old ones were showing signs of dry rot and
cracking. This is a beautiful, nearly show truck, that you will absolutely love.