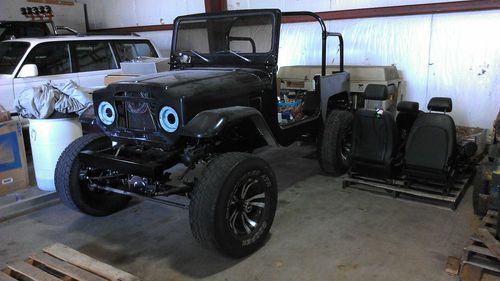 This is a beautiful project fj40 landcruiser that my father and i bought as it sits with hopes of finishing it together. he has since had 3 back surgeries and we are not going to get it done so we've decided to sell it to make room for other things. The project is pretty much down to the final assembly and fit/ finish stuff.

it is a fiberglass body with a one piece front end

the frame is black powdercoated

the engine is a GM performance 350 V8. i believe that it is still under a warranty as it has only been fired once. as far as i know we can transfer that warranty, but i do not know for sure. the exhaust is completely jet hot coated from the headers through the tail pipe. the listing says it is an inline 6, because ebay won't let me change it.

the transfercase is a an NP208

axles are GM 10 bolts with outboard mounted leaf springs. is has been converted to power steering as well.

it has 17" rims with cooper discoverer tires. the rims are in good shape, the tires are used, maybe good for a summer of road driving, but not much beyond that.

-lots of misc other parts. i'm in the process of unpacking all the parts that we have stashed for it and ill update the listing as i have more detials.