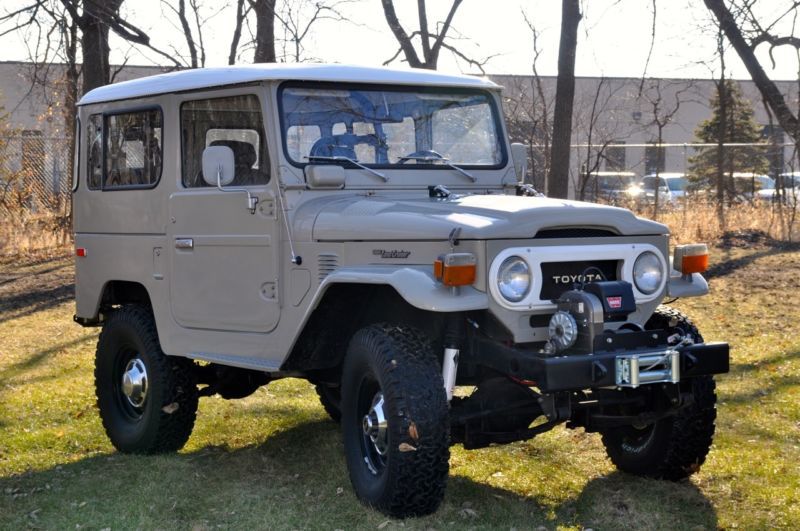 Please message me with questions at: sudiespparsa@ukprofessionals.com . Beautiful Rust Free 1977 FJ40 with Power Steering
Details & Condition
-------------------------------------------------------------------------------------------------------------------
This truck is in superb condition. She needs nothing! You will NOT find diamond plate, fender flares, CB antenna,
jerry cans, roof racks, or a V8. The Toyota 2F inline six cylinder was rebuilt by Race Engine Design in Georgia and
runs out beautifully! Power steering from JT Outfitters has recently been added. The clutch, transmission and
transfer are smooth and work perfectly. The truck has stock 4.11 gears. The body, undercarriage and frame are rust
free and the paint work is outstanding. The truck has been de-smogged and under the hood you will find the original
2F inline six cylinder with a Weber 38 carb, electronic ignition and ceramic headers which give the truck the power
you need to cruise at 70MPH if you like. All body panels were taken to bare metal and there is no rust here.
Over the last 10 years the truck hasn't been driven more than a few thousand miles and it's previous owners have
replaced, refurbished or restored just about everything on her. Window felts, weatherstripping, hard top gasket,
upholstery, seat belts, headliner, dash pad, emblems, mirrors, front and rear signals, hood hooks, wheels, new Warn
hubs, new BFG tires, hubcaps, winch, suspension, shocks, exhaust, all stainless steel fasteners, etc. The axles
have been gone though and there is literally thousands of dollars worth of receipts to look over.
The horizontal surfaces of the floors have had LineX professionally applied and you can rest assured that the
sheet metal under that lining is in the same great condition as the rest of this FJ40. The floors are covered with
a very nice heavy duty custom fitted mats from Cool Cruisers. The interior is excellent and EVERYTHING works, as it
should. The heater works well, turn signals, hazards, headlight high and low beams, wipers, taillights, backup
lights, license plate lights, odometer, speedometer, fuel, oil, amp and temp gauges all work perfectly.
The audio system consists of a Panasonic AM/FM/CD with free standing 6x9 speakers enclosures in back. The stock
metal console sits between the reupholstered front seats. The jump seats in the rear have new upholstery as well.
The headliner has been replaced with the correct material. Under it all you will find the 2.5" TPI Smokey Mountain
suspension with new bushings, greasable shackles an new shocks. New Toyota 15 inch steel wheels and hubcaps with
new WARN locking hubs surrounded by new 33 x10.50 BFG tires. Hanging on the swing out rear tire carrier is the
matching spare and below that you will find an extra wide custom made rear step with built-in 2" receiver.