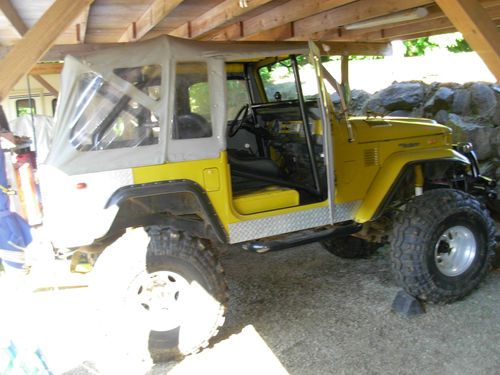 1975 toyota landcruiser FJ40,powered with a 350 chev.v8 ,4 speed trans with an fj60 transfercase.runs and drives great.lifted with Weld wheels and 38" super swampers. power brakes,power steering. front and rear disc brakes. front and rear air locker differentials. Rancho gas adjustable shocks and after market steering system. front and rear 8000lb warn and ramsey winches on custom made bumpers with 3 place jerry gas cans on rear. dual batterys.with cut off switch. 6 point roll cage with built in,custom front and rear seats and 5 point harnes. Alpine CD stereo. Has 3 different tops,a full original hard top with doors,a full soft top with doors,and a black bimini top with half doors. off road lites in front and rear. over 22000.was invested in to this off road machine by Randys off road in montana.plus all the money we put into it over the 9 years we've owned it.Drives straight and runs great,at 60 mph,can be driven anywhere on and off road. We've had a lot of fun with this toy,and always kept it covered.It's built to be used,and will go most anywhere. The last 2 years,with the kids grown,I've not driven it enough,so it's time to sell.