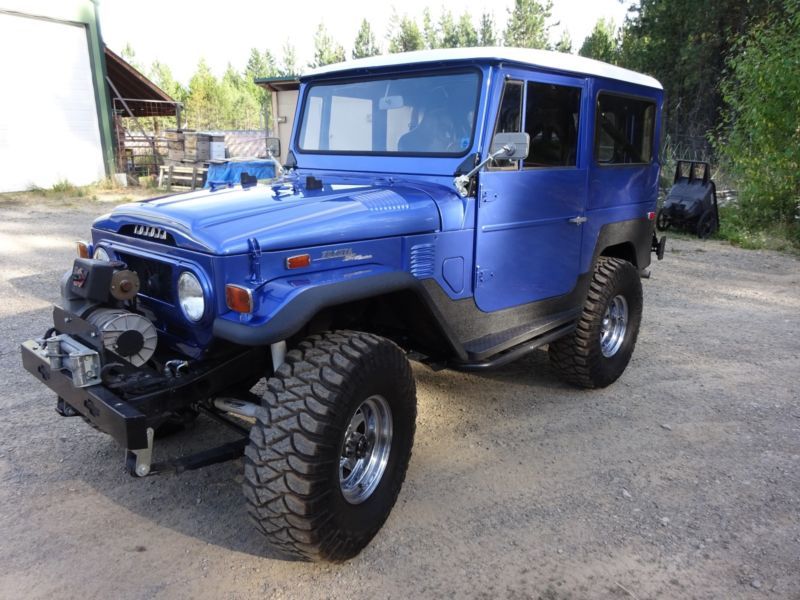 This Toyota FJ40 has been very well built and looks amazing. It is very strong mechanically and the recently
rebuilt 350 V8, 5 speed manual gearbox, and 2 stick transfer case provide a ton of 4x4 power. It can drive down the
highway at over 70 mph with ease. This FJ40 has been very well built and was a higher dollar build with the drive
train being remanufactured from front to rear. Restoring an FJ to this level is very expensive and this is a chance
to own one of your own for a fraction of the build cost. Here is your chance to own a remanufactured and enhanced
classic FJ40. It needs nothing except an owner to appreciate all the work I have done on it. This is everything you
are looking for in a classic FJ.
Mechanical features:
Chevy 350 with 4 barrel Edelbrock carburetor and intake and dual exhaust - Rebuilt (less than 5000 miles)
5 speed manual transmission - Rebuilt (less than 5000 miles)
2 stick transfer case - Rebuilt (being done now)
Aluminum radiator with secondary cooling fan
Power front and rear disc brakes
Power steering
ARB lockers front and rear with compressor
4" lift
Holley electric fuel pump
Exterior features:
Heavy duty "white knuckle" rock sliders
Heavy duty front bumper with warn winch
Heavy duty "tactical armor" rear bumper with tire carrier, jack mount, and dual fuel can carriers
Two stage blue paint job with rhino lined fenders and rear corners
35 inch Mickey Thompson radials and 15 inch rims
Interior features:
Full roll cage
Bedliner on floors
Bomz racing bucket seats
New dash - indestructible
Dakota digital gauges with GPS speedometer
Tuffy lockbox
Sony stereo/cd player and quadraphonic sound system
Jeep-style rear seats