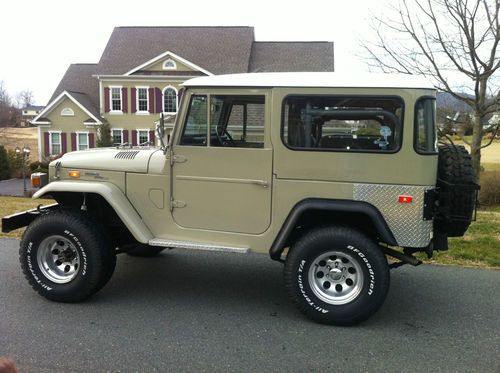 I have been looking for a nice FJ40 for a long time.  I purchased this one for my nephew who was returning from serving in Afghanistan.  He is now attending American University in Washington DC and can not take the Land Cruiser given he does not have a safe/appropriate place to park/store the FJ. I have kept it stored in my garage and have been enjoying driving it to work on the nice days.

As a result, I am thinking about keeping the FJ40 for myself, but thought I would let the market decide whether I should sell or keep it. Its paid for - and I do not need to sell it.  Given how well it drives - I would consider keeping it since I am not confident I could find another that drives this nicely
It is a 1971 FJ40 and is in what I would consider VERY GOOD condition.  This truck has not received a body/off nut and bolt restoration but many aspects of the FJ40 have been updated, restored, or replaced.  So...it is not a "show" restoration but it receives countless compliments due to its condition and many would consider it in Exellent condition.
1.  It has a 1977 2F engine (upgrade/iimprovement from the original '71 F engine).  It starts, idles, accelerates, runs, exactly how it should - which is perfect.
2.  It has the 1977 4 speed manual transmission (upgrade from the original 3 speed tranmission).  It shifts, and down shifts, perfectly. The clutch is new and it mechanically drives as it should.
3.  The front differential and disc brake setup is also from the 1977 FJ40 (major upgrade from the front drum brake originally on the 1971)  It brakes amazingly well - evenly, does not pull or pulsate.  NO COMPARISON to how a drum brake FJ40 stops.
4.  The vehicle is geared low - so it does great around town and my commute to work where I do not exceed 60mph.  I have driven it on the highway at 65mph without any issues, and it does not "wobble" nor "wander" on the road.  You can tell that it has ample power/torque as it pulls up grade on the highway very nicely  but is running out of gear to keep up with traffic in the left lane where cars are  doing 80 in a 70mph speed limit.  Therefore - this FJ40 really belongs in the right lane.
Other:
Zero visible rust nor signs of prior rust problems (driver floor pan patched/repaired with replacement metal)
All of the fluids have been changed.
Rear jump seats (center facing)
Front wipers work
Heater (front and rear work)
All of the lights/blinkers/brake lights work
Pioneer stereo/CD included
A/T tires are in good condition with miles remaining
Hard top shown is NOT included as it belongs to another FJ40 that is under complete restoration.  I do have a bikini top for the FJ40.
FJ40 really does not need anything that I am aware of.  If I keep I would likely put new tires on next year to improve the ride - but not with any urgency.  I have not owned this that long - but I have racked up both local and highway miles and have the confidence to drive this to California tomorrow.  I have owned many show cars, sports cars, and luxury cars over the years.  For whatever reason - this is becoming one of my favorites so I will not be upset if it stays in my stable.
Lastly:
Feel free to inspect/drive if you are a local buyer.
I will not ship overseas
I will not disclose a "buy it now" price - this is an auction to the highest bidder