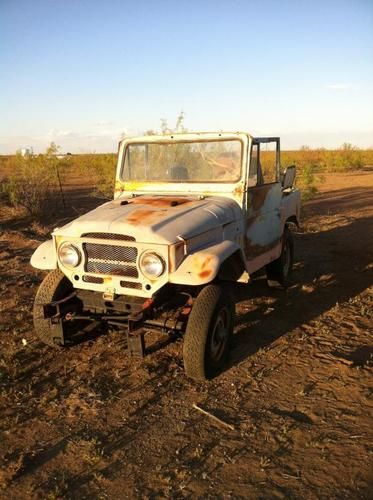 Condition: UsedA vehicle is considered used if it has been registered and issued a title. Used vehicles have had at least one previous owner. The condition of the exterior, interior and engine can vary depending on the vehicle's history. See the seller's listing for full details and description of any imperfections.Seller Notes:"This vehicle is a project. It is in parts, most needed parts are included. Engine runs, currently on a stand. Transmission needs work."

This is a great start for a project! This 1967 Toyota Land Cruiser was equipped with a small block Chevy V8, an overhaul was started on the truck by the previous owner, but he had passed before completing his work. Many hard to find parts included, will add more pictures soon. Has a soft top and doors, as well as the hard doors. The motor runs on the stand, the transmission needs work. Most of the parts needed to get this truck on the road are included. Once again, this is a project, not a street ready vehicle. No warranty, no returns, please ask all questions before bidding. Truck will need to be picked up on a flatbed, with room for extra parts. Truck is located in Monument, NM. Title is from Arizona.