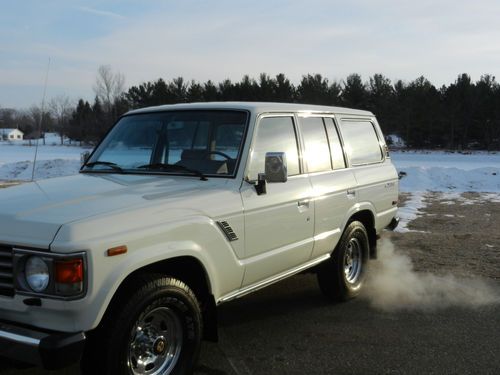 You are looking at an extraordinary condition Toyota Landcruiser.  This vehicle is all original except radio, emissions (taken off, parts come with), exhaust header, and air shocks in rear (all the stuff you would want to upgrade!!) Also over 400 hours were put into a fully restorational paint job by a professional shop in Minnesota that specializes in restoring classic vehicles.

I became second owner of this beauty three years ago when I purchased it from it's original owner in western Nevada.  From there I actually drove it home. That's over 2,000 miles with out a glitch!  When I got it home to Minnesota, I was reluctant to drive it due to the condition of the original paint.  Even though my body shop guy didn't think it needed new paint because there was NO RUST, the lack of clear coat combined with Minnesota winters convinced me that it was a good investment.

This vehicle comes with all the extra parts I got with it.  Front and rear bull bars, safari rack, starter, belts, water pump, fuel pump, and more. . .

**LITERALLY, this vehicle is like new.  Inside, outside and under the hood.  All glass and all panels, fenders, inner fenders, doors (gutted), tailgate and radiator were removed during paint process. Basically, if a bolt held it on, it was taken of and apart for painting.

This is an original vehicle (numbers matching). This is not pieced together from other Landcruisers.

I am selling this vehicle to a better home so my kids and dogs stay out of it.

I have been a huge fan of the classic Landcruisers and appreciate them.  This Land Cruiser is very sharp, show quality.

Thanks for looking, my name is Troye and my number is five07 2six1 zero20one.  Please call if you have questions about the vehicle or arragements for transportation.

This vehicle is also listed locally so this listing might end early.