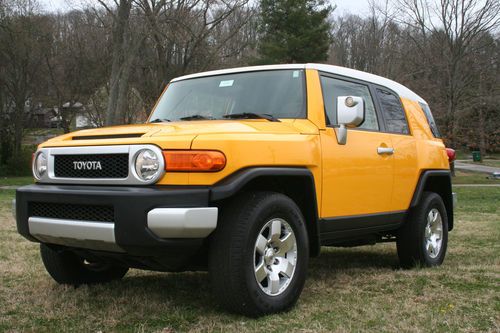 Condition: Certified pre-owned: To qualify for certified pre-owned status, vehicles must meet strict age, mileage, and inspection requirements established by their manufacturers. Certified pre-owned cars are often sold with warranty, financing and roadside assistance options similar to their new counterparts. See the seller's listing for full details. ...
UP FOR AUCTION IS A 2007 TOYOTA FJ CRUISER.
IT WAS TAKEN IN ON A NEW CAR TRADE, IT HAS A CLEAN 144,000 MILES. IT LOOKS AND DRIVES LIKE A 40,000 MILE FJ.
NO DISAPOINTMENTS WITH THIS ONE, RUNS, LOOKS AND DRIVES 100%.
THE RESERVE IS SET AT A WHOLESALE PRICE, THOUSANDS BELOW RETAIL.
WE HAVE BEEN IN BUSINESS FOR 25 YEARS SERVING OUR CLIENTS WITH 100% SATISFACTION AND PROVIDING SUPPORT FROM OUR PROFESSIONAL STAFF.
WE ARE AVAILABLE 7 DAYS A WEEK TO ANSWER ANY QUESTIONS OR CONCERNS.
WE ARE LOCATED 1 MILE FROM MCGHEE TYSON AIRPORT.  WE PROVIDE AIRPORT PICKUP AND DROP OFF.
WE REQUIRE A $500 DEPOSIT AT THE CLOSING OF THE SALE WITH THE BALANCE DUE WITHIN 7 DAYS.
IF YOU HAVE ANY QUESTIONS OR CONCERNS, PLEASE FEEL FREE TO CONTACT US.