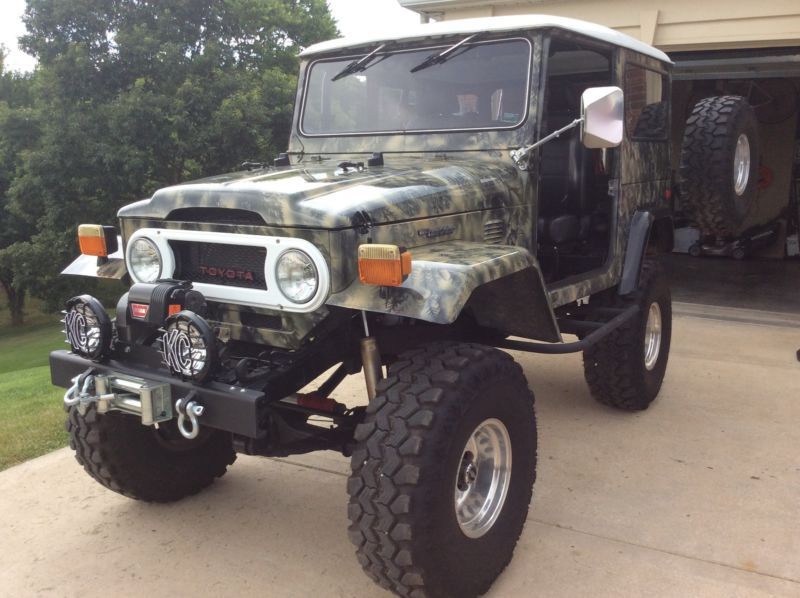 If you have any questions feel free to email: kandicekttipps@guy2.com .

This is a once in a lifetime opportunity!!

This 1974 Toyota FJ-40 Land Cruiser is Close to Perfect, It Runs and Looks PERFECT!

I did so many modifications to this iconic Rugged beast; the work, time and money spend on this amazing 1 of a Kind
fj40 Land cruiser has known very little limits!

You will never again see this type Of 1974 Toyota FJ40 Cruiser In your Life Again-
The Mechanical work done is second to none, it runs and sounds PERFECT

The Engine has Been Professionally installed and Fitted perfectly to all specs and has unbelievable output of
power.

The Mechanical conversion and modifications by itself exceeds $15,000!!!!
The Cosmetic work done On this SEXY RUGGED 1974 Toyota FJ40 4x4 land Cruiser
2. OVER THE TOP AGGRESSIVE AS HELL ROLL CAGE BAR with HEAVY METAL RACK – KING OF THE ROAD LOOK
3. Front seats have THE OFF-ROAD durability and soft feel of sexy 2 toned bucket seats
6. The BIG BEAST FJ40 has a Professional Lift Package suspension Installed

THIS TRUCK IS Nightmarishingly INTIMIDATING


Overall this is a truly Remarkable 1974 Toyota FJ40 4x4 Land Cruiser with so many extras and modifications it is
truly remarkable---- Something you will never see again in your lifetime!!

Every-time this vehicle is driven People get excited to see it - a Definite Head-Turner Eye-Catcher and attention
hogger!!

A Truly Remarkable Piece And a True Joy To Drive and Own!!
One of the Most rare, remarkable, unique and Unbelievable Vehicles on Planet Earth!!