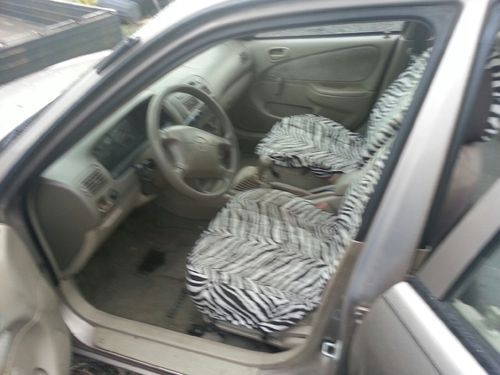 Condition: UsedA vehicle is considered used if it has been registered and issued a title. Used vehicles have had at least one previous owner. The condition of the exterior, interior and engine can vary depending on the vehicle's history. See the seller's listing for full details and description of any imperfections.Seller Notes:"Engine runs, but #4 cylinder is shot as it has only 20 lbs PSI. Dings and scratches are on vehicle. Tape is holding the R/F lens to signal cover. Front windshield may have some rock damage."
1998 Toyota Corolla, 5spd, tires at %60, Body straight with few dings and scratches. Tape is holding R/F signal lens in. All accessories work such as Radio, Air Cond, Heater, Headlights etc. Car is Champagne is Color. My daughter was driving this daily until the #4 cylinder dropped in PSI.
This Vehicle does start and run, but #4 cylinder has 20 lbs + of PSI. Motor needs to be rebuilt or Replaced.
Car is being sold AS IS.  Will not be released until payment clears. Pick up welcomed, could drive it short distances.