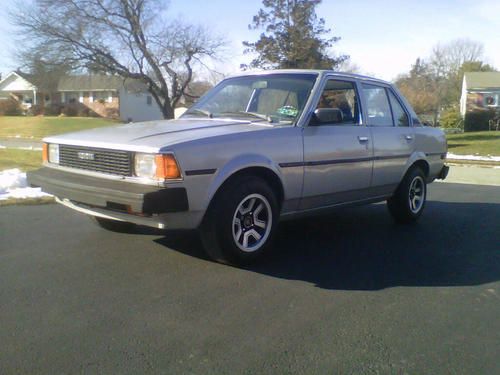 Up for sale or trade is a Silver Automatic 1983 Toyota Corolla (not a 1.8 but the same body style) 4 door Sedan with less than 80k original miles. This low mileage classic has a clean and clear PA title and is ready to be restored or driven!

- needs some body work...not real bad but has some rust and dents (it's 30 yrs old)
- auto gear shifter is a little loose but still shifts into gear with no problems
- no radio
- interior wise, seats and dash need work
- needs a right taillight for inspection (PA - expired in October 2012)
- needs a new master cylinder (brake pedal is very soft)

These cars are very hard to find for a decent price in running condition like this one; look around eBay and you'll see what I mean. With a little love, this car will easily be worth $4-5k. I'm trying to be as honest as possible in the interest of saving everyone's time. Only serious buyers need respond with questions. Thank you for your interest!