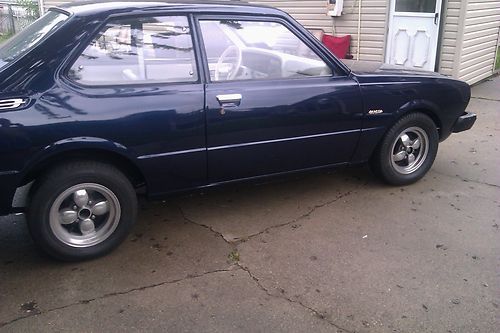 Condition: UsedA vehicle is considered used if it has been registered and issued a title. Used vehicles have had at least one previous owner. The condition of the exterior, interior and engine can vary depending on the vehicle's history. See the seller's listing for full details and description of any imperfections.Seller Notes:"EXCELLENT CONDITION! CARB NEEDS A LITTLE TUNING BUT THE CAR RUNS GREAT!"

1977 TOYOTA COROLLA-THIS CAR IS FROM CALIFORNIA AND THE BODY IS MINT CONDITION!  IT

WEBERS, THE BLOCK HAS BEEN BORED AT 40 OVER, NEW HIGH PERFORMANCE CLUTCH

KIT..TOO MANY PARTS TO MENTION! THE CAR HAS A CELICA TRANSMISSION AND A GTS REAR.

THE CARB NEEDS A LITTLE TUNING BUT THE CAR RUNS GREAT!