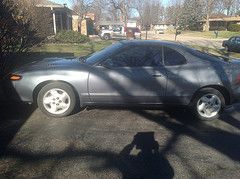 This auction is for a 1990 Toyota Celica Alltrac.

The car runs and drives great and is rust free.  It has approx 74,000 miles. The car's odometer was replaced in 1991 with 8700 miles on it and the odometer currently reads 65600.  I have a signed affidavit from the prior owner explaining that the odometer was replaced because of  faulty cruise control.  Before I bought the car I pulled a Carfax because the title says "not actual mileage" and the Carfax showed that the mileage I've stated is accurate.

The car needs tires asap, all 4 tires need replaced.  I was planning on getting new rims so I didn't buy new tires for the car.  Since I'm selling I'll just leave it up to the new owner replace the tires.  Currently the spare is on the car, the spare is in very good condition, I'm not sure if it was ever put on before I put it on.

There is a dent in the driver side fender.  You can see it in the pics, it was like that when I bought the car but it appears it was caught on something as the car was being backed out and it pulled the fender out some.

It has a minor oil leak, I believe its coming from the oil pan gasket but wasn't able to very exactly where its coming from. Its a very minor leak and the car doesn't use much oil.

It has old window tint that is peeling and needs removed.

It has minor hail damage, mostly on the sunroof.  I tried to show it in the photos but it is hard to see.

the car has the usual minor paint chips etc for a nearly 25 year old car.  The wiper arms have rusted and need repainted or replaced.  They work fine, they just need a cosmetic touchup.

The interior is in excellent shape with a leather interior.  The back seats look pretty much brand new, the front are in excellent shape but have some cracking and normal wear from being sat in.  The drivers side seat also has a small hole in the side where the door shut on the seat belt and pushed it into the seat.

There is a place on the hood that looks stained.  This may buff out, it's hard to see if you're not looking at the right angle but it looks as if something was on the hood and made the color where it touched slightly off.  It didn't affect the clear coat and again, this may come out if detailed, I've only washed the car with soap and water and can't remove it that way.

The car is in excellent overall condition and is rust free.

I've been using car as my daily driver for 3 months since I bought it and have had zero issues with the car.  It runs and drives perfectly.  Everything on the car works as it should.  The power windows work perfectly.

It has the System Ten stereo with the original factory dual CD/Cassette player and sounds great.

As far as I know the car is all original and has never been modified.

I reserve the right to end the auction at any time if I get an acceptable offer.

Thanks for looking and if you have any questions please feel free to ask.