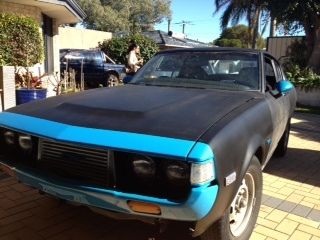 Condition: UsedA vehicle is considered used if it has been registered and issued a title. Used vehicles have had at least one previous owner. The condition of the exterior, interior and engine can vary depending on the vehicle's history. See the seller's listing for full details and description of any imperfections.Seller Notes:"Unfinished project"

Up for sale is my 1977 ra28 celica GT. it's been 7 years in the making and I now have to sell it. :( Spent about 20k on it since I got it. Unfinished project. Black plasti dip removable paint, new rotors and brakes, new carpet, trims, led gauges, GPS speedo gauges. New fuel tank, fuel pump. Front mount intercooler. It's got a 1ggte twin turbo engine gen 3. Engine starts and runs. But need to finish wiring. Comes with lots of parts! Including an extra engine!