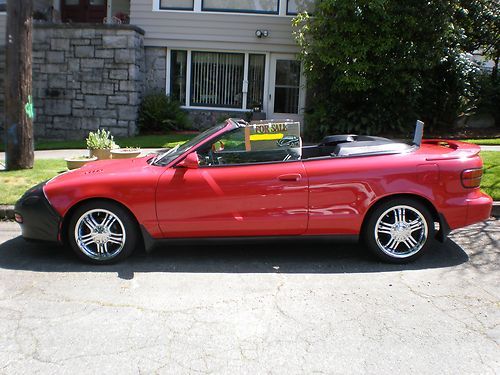 This Unique Design for the Celica Captured the Eyes of the Car Desinrs around the Planet......which Changed Sport Car Looks Forever!

ONLY MY BROTHER AND I HAVE OWNED THIS CAR!!!

WARNING AND VERY IMPORTANT NOTE!!! MOST PHOTOGRAPHS YOU SEE IN THESE ADS ARE VERY MISLEADING........... WHEN I SELL A CAR I MAKE 99.9% SURE THAT WHAT YOU SEE IN THESE PICTURES IS  COMPLETE INTENSIVE OVERLY HONEST NEVER HIDING OR MISLEADING ANY FLAWS WITH THE HOPE THAT THE BUYER WILL MISS THEM
HAVING SAID THAT I HAVE Over 100 pictures with High Resolution Quality that show what the human eye can't and will not see even inches from any surface of the car ( Dust etc. ) and note: I went out of my way to show any dents dings scratches scuffs.....IF ANY AT ALL
.............trying to captured in a manor to show any minute and unnoticeable blemishes and hiding Nothing
All or Any One Particular AngleWill Be furnishd to you with your showing interest


A MUST SEE AND TRULY  BREATHTAKINGLY BEAUTIFUL CAR


TO SHOW YOU JUST HOW BEAUTIFUL THIS CELICA IS I HAD IT CERTIFIED BY MOTA INC. MOTA STATED: This Celica with less than 100K is as Perfect as you will find anywhere and hard to believe that it is a 1991
" CERTIFICATION MEANS YOU HAVE TO DO NOTHING TO THIS CAR "