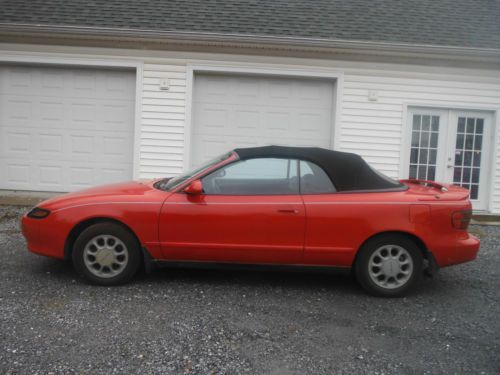 Condition: UsedA vehicle is considered used if it has been registered and issued a title. Used vehicles have had at least one previous owner. The condition of the exterior, interior and engine can vary depending on the vehicle's history. See the seller's listing for full details and description of any imperfections.Seller Notes:"CAR SHOWS MINOR HAIRLINES SCRATCHES AND FADING IN EXTERIOR WHICH IN COMMON FOR ITS AGE. THERE IS A SLIGHT TEAR IN CARPETING ON DRIVER SIDE FLOOR. PASSENGER SIDE VISOR IS MISSING. CONVERTIBLE TOP SHOWS SIGNS OF AGE, A COUPLE OF SNAPS ARE MISSING AND REAR WINDOW IS DISCOLORED."

THIS TOYOTA IS VERY CLEAN AND WELL MAINTAINED FOR THE YEAR!

THIS CELICA OFFERS CLOTHS SEATS, POWER WINDOWS, LOCKS, STEERING, BRAKES, MIRRORS, AND POWER CONVERTIBLE TOP. NEW TIRES WITH LESS THAN 2000 MILES ON THEM AND ORIGINAL WHEELS. NEW JVC AM/FM/CD/MP3 STEREO. COLD AIR CONDITIONING AND A HOT HEATER. DUAL AIRBAGS AND TILT WHEEL. WE HAVE BOTH KEYS BUT NO OWNERS MANUAL.

THE INTERIOR SHOWS LIGHT WEAR IN CARPETING AND UHOLSTERY WITH A SLIGHT TEAR IN CARPETING ON DRIVER SIDE FLOOR AND THE PASSENGER VISOR IS MISSING. THIS CAR HAS SLIGHT FADING IN PAINT AND HAS FEW HAIRLINE SCRATCHES. THE TOP IS IN GOOD SHAPE BUT HAS A COUPLE OF SNAPS MISSING AND REAR WINDOW IS SLIGHTLY DISCOLORED. THIS CAR IS USED AND HAS MINOR WEAR AND TEAR FROM AGE BUT IS A VERY CLEAN AND BEAUTIFUL CAR!