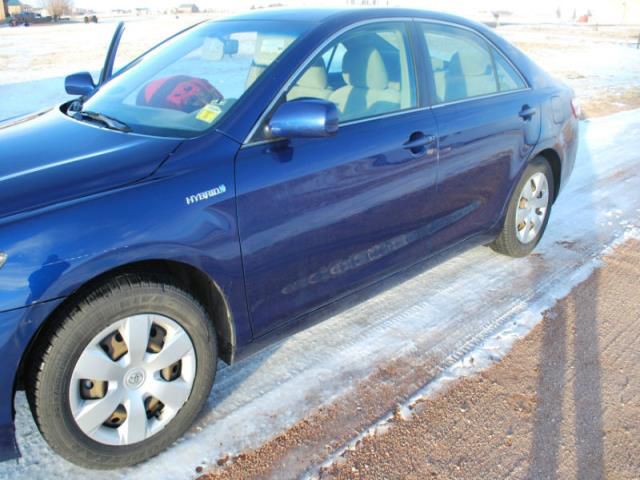 2009 Toyota Camry Hybrid ONE OWNER NON SMOKER NO PETS I bought this brand new from the Dealer , I invite you to come look at the Car before you Bid, I am a mechanic and have worked as a mechanic for over 30 Years, which is why I bought the Camry, in the last 3 and half years the only major issues I have had was when it was being transported from Germany to the US they tried to jump my car while in transit, they burned my battery up and it was replaced brand new in 2011 . Some of the minor issues were the following. APR 2013 BRAND NEW BRAKES INSTALLED BY BRAKES PLUS MINOR SCRATCHES AROUND THE CAR BY WALMART BUGGIES & DOOR DINGS NEW TIRES WITH PROTECTION PLAN INSTALLED LAST WEEK BRAND NEW WINDSHIELD INSTALLED THIS WEEK ( COLORADO ROADS ) VEHICLE RECALL BRAKES ( DEALER CALLED US IN AND INSTALLED PART ) OCT 2013 NO ACCIDENTS AT ALL ( THIS IS THE WIFES CAR ) I have taken Pictures of the Scratches I invite you to come look and test drive My Camry .. I am right outside Colorado Springs I have a clean title and will sign it over to you upon complete payment to include leaving all spots blank so you can turn into your DMV I am including a TOM TOM GPS which I will not be needing as I am buying the new 2014 Toyota Camry Hybrid that will have a GPS built in . My Car is great on Gas .. I will only buy Hybrids from now on .