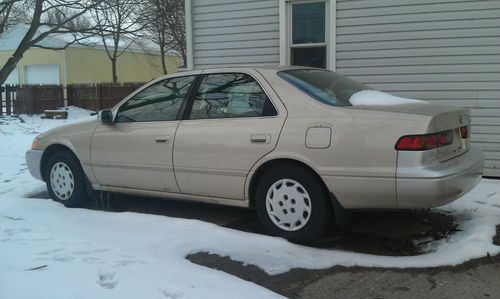 This 1998 Toyota Camry was originally bought by me 10 years ago. Most of the mileage was highway miles. I traveled the NYS Thruway from Buffalo to Syracuse and occassionaly to Albany in my business.  Later my son drove it to back and forth to college and most recently my 82 year old mother drove it until she just recently gave up her license. It was a great car and the engine runs as good as it did when I bought it and the transmission shifts fine. I have changed the timing belt twice over the last 10 years so it should be good for many more miles and I have always run Slick 50 at every oil change. It has newer tires, had exhaust work, and was NYS inspected about 5 months ago. The truth is you could slap a plate on it today and drive it anywhere. There is very little rust and I've pictured most of it. Thats the Good!  Now the bad. The air condition worked until last summer and slowly got warmer. I've never had it charged up, so my guess is that the problem.  I don't smoke and I use to be able to call it a non smoking vehicle but my son and his friends smoked in it when he took it to college about 4 years ago now, though it really doesn't smell, there are a few cig. burn spots here and there, but not too bad and the same kid broke the rt. side rear view mirror. I started to repair it but its not finished and that will be your project. The rear struts need to be replaced. I hear them rattling in the trunk area and its starting to boat a little over bumps, the check engine lite is on but it didn't stop the NYS inspection and finally I have been nursing the shifting cable for years. It should be replaced. I have toggled it so it works but It drove my 82 year old mother crazy the shifter doesn't really line up correctly with the P R and D..lol. There are the usual scratches, dings and rubs of an older car. It sells free and clear and "as is" but if you or your kids need a dependable  pretty good looking ride with minimal repairs, that also by the way also gets great gas milegage, then this is your car.

The car is available to be viewed locally and is also for sale locally so I reserve the right to end the auction should it sell. Read my feedback, and bid with confidence. I will guarantee the car is as described.