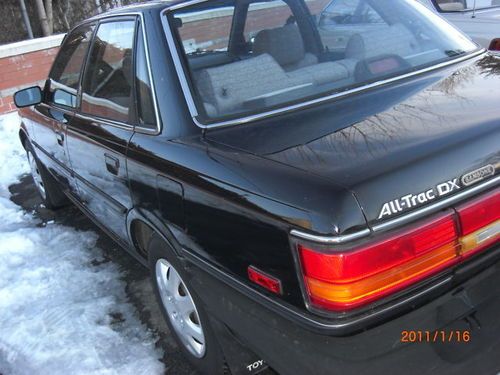 Rare 1990 Toyota Camry DLX All-Trac.  Full time four wheel drive. great in snow. four wheel disk brakes and four wheel independent suspension. Has new waterpump, new cam seal, crank seal, timing belt and tensioner.  new valve cover gasket. Could see that someone has changed the headgasket and head bolts at some point. last year replaced  battery, radiator hoses, alternator and all four brake rotors and pads. body is real straight. can see where there was some rust repaired at upper rear section of both rear wheel wells. there is a rust hole in the spare tire compartment of the trunk. rockers and floor pans are rust free. easily repairable. slight body damage by the front parking light. some waviness on the dash by the defroster. otherwise the interior is in real good condition. tires are three years old with about 10,000 miles on them. car runs good.