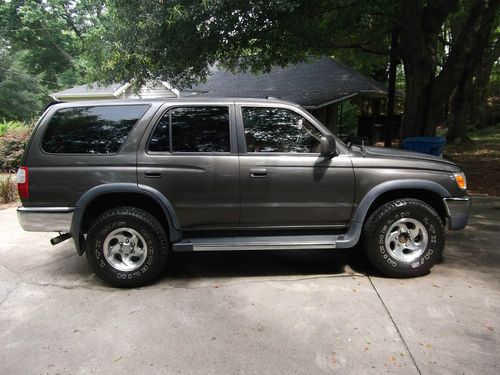 Condition: UsedA vehicle is considered used if it has been registered and issued a title. Used vehicles have had at least one previous owner. The condition of the exterior, interior and engine can vary depending on the vehicle's history. See the seller's listing for full details and description of any imperfections.Seller Notes:"Faded paint on hood and roof. Scratches on Driver's side. Oil seepage from engine, but doesn't cause any problems...just check it weekly. Tires shake at 55-60MPH. Normal wear and tear."
Up for bid is my 1998 Toyota 4Runner.  I bought it used in 2000 from CarMax in Georgia.  At that time it had 60,000 miles on it and I believe it was a 1 owner.  I have since used this as a daily driver and it now has 272,636 miles (at time of auction) on it.  This vehicle has been an awesome workhorse, and it still has lots of life left in it.  I am selling it because I recently bought a new car.  This is the third 4Runner I have owned, and if you know 4Runners and Toyotas in general, then you know how long they last!!!
This has been a non-smoker car, and it is very clean.  I have had no major accidents in this vehicle, only a few small fender benders with nothing damaged or replaced.  There is no rust. I have complete records since my ownership, and I have regularly changed the oil myself. When I first bought the vehicle I used synthetic oil, but then I changed over to regular oil.  It has an excellent set of Michelin's with lots of tread life left on it.  All power options work great which includes, mirrors, locks, windows, sunroof, cruise, tape player/radio,etc.  It has a keyless entry/alarm system with 2 remotes and 2 keys.  I have all owner's manuals. The brakes, transmission and engine all work great too.  The interior is very clean as I am a neat freak!!  Title is free and clear.
Since this is a 1998, it will have some minor problems.  One of the issues which seems to be a Toyota thing is that the paint seems to fade after time.  This has happened on the hood and roof.  It could easily be painted for pretty cheap.  There are also some scratches on the left side door.   Back in 2009, I was told that the valve cover gasket should be replaced, yet here it is 2013 and it still runs fine.  There is some oil seepage from the engine, but as long as you check it regularly and don't mind a little burnt oil smell from time to time, you will be perfectly fine.  I think it might need an alignment, because when you hit 55-60 MPH, it shakes while driving.  It hasn't bothered me, but it is something that will need to be looked at soon.  Since it is over 15 years old, it is going to have normal wear and tear, so expect some cracks in the leather or plastic, dirt on the upholstery and even some broken plastic throughout.  1 wheel cover is missing.  Other than these minor issues, this 4Runner works and looks great!!
This vehicle is being sold as is, with no warranty, expressed written or implied. The seller shall not be responsible for the correct description, authenticity, genuineness, or defects herein, and makes no warranty in connection therewith. No allowance will be made on account of any incorrectness, imperfection, defect or damage. Any descriptions or representations are for identification purposes only and are not to be construed as a warranty of any type. It is the responsibility of the buyer to have thoroughly inspected the vehicle, and to have satisfied himself or herself as to the condition and value and to bid based upon that judgement solely. The seller shall and will make every reasonable effort to disclose any known defects associated with this vehicle at the buyer's request prior to the close of sale. Seller assumes no responsibility for any repairs regardless of any oral statements about the vehicle.
I have 99% positive feedback, so bid with confidence!!A $500 deposit is due within 24 hours of winning the auction.  I will only accept PayPal for the deposit, and the remaining amount to be paid in cash or cashier's check.  Delivery is available using the carriers provided at the Buyer's expense. If you have any questions, please ask.    Good luck and HAPPY BIDDING!!!
On Jul-29-13 at 02:53:31 PDT, seller added the following information:

I also forgot that the power antenna is broken, however the motor still works.  I replaced one before and it's pretty easy and only costs about $10 for an aftermarket replacement from Ebay.