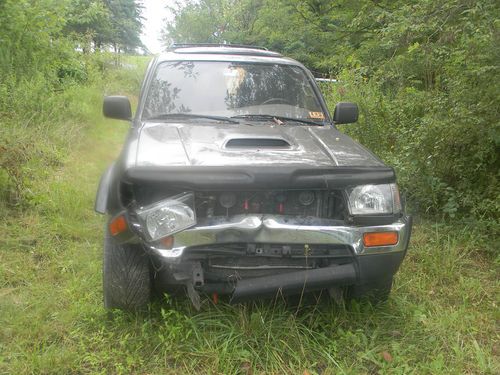 Condition: UsedA vehicle is considered used if it has been registered and issued a title. Used vehicles have had at least one previous owner. The condition of the exterior, interior and engine can vary depending on the vehicle's history. See the seller's listing for full details and description of any imperfections.Seller Notes:"This vehicle does not have any problems other than it struck a deer. the radiator bumper grill and head lights are all that needs replaced that was by a inspection at the local body repair shop."

Up for sale is a 97 Toyota 4 Runner Limited this vehicle is in great shape with lots of extras. The Only Problems are as Follows This is my sons ride he was driving and struck a deer. It has the front end damage from that. We took it to our local body shop and they estimated to be around $1000.00 in parts for damage. This included Bumper, Grill, Headlights, and radiator. The hood and both fenders were not damaged so nothing would need painted. My son does not want the vehicle so i am listing it to be sold as is for parts or repair. Everything else works great transmission, engine, a/c, heat, and all power accessories. This vehicle also has 5 TV monitors inside 2 on the front visor 1 built in cd player and 2 in driver and pass head rests. It as well has alot of  stereo equipment such as speakers and a custom built box and amps. Its has strobe lights inside and in the two head lights. This vehicle was taken to several of local car shows just for show and tell fun. It has good tires over half tread and a set of rims that cost approx $1000.00 they look a little rough but they just need cleaned as well as the vehicle. Its been sitting for around a year but started once to move just a short distance  out of the way and it fired right up. It also has a very elaborate alarm system with a remote that shows why the alarm is going off and etc. This vehicle would make some young driver a good vehicle with just some parts and a little labor it would be good as new. happy bidding Thanks