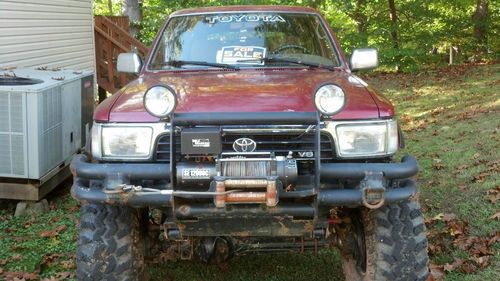 Condition: UsedA vehicle is considered used if it has been registered and issued a title. Used vehicles have had at least one previous owner. The condition of the exterior, interior and engine can vary depending on the vehicle's history. See the seller's listing for full details and description of any imperfections.Seller Notes:"This 4 runner is designed for OFF ROAD use. Front and rear straight axle with 589 gears. Brand new 37-12.50 x 15 Hi Rok tires and Marlin Crawler leaf springs. Also has winch and spare with jack. Air conditioning and also powere windows and locks as well as power moon roof."
1994 TOYOTA 4 RUNNER
OFF ROAD VEHICLE
37-12.50 X 15 INCH HI ROK TIRES
589 GEARS
MARLIN CRAWLER LEAF SPRINGS
V-6 / 5 SPD
CALL FOR MORE INFO
304.741.4132