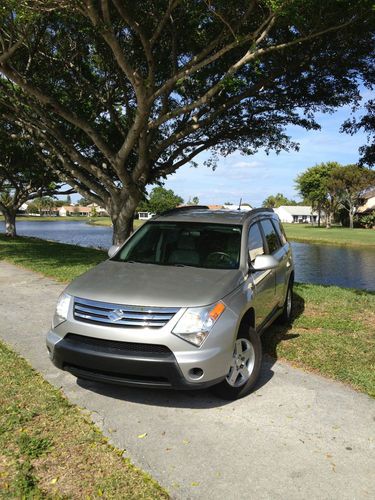 Condition: Used: A vehicle is considered used if it has been registered and issued a title. Used vehicles have had at least one previous owner. The condition of the exterior, interior and engine can vary depending on the vehicle's history. See the seller's listing for full details and description of any imperfections. ...
Don't bother with buying from a dealer.  All the fees they charge, like 6% Sales Tax, Title, License Fee, Registration Fee, Finance Charges, Emission Testing Fees and Compliance Fees are additional to their advertised price!
This XL7 (Extra Length 7 passenger) does NOT have 3rd row/seat, HOWEVER, I just called 1-800-338-9208 and talked to Jose who quoted me a 30% discount, bringing the price down to $1200.  This price includes all the bells and whistles... brackets, etc.  If you call, ask me for ref #.  Jose's extension is 1159.
7,000 miles left on a FULLY TRANSFERABLE POWERTRAIN WARRANTY!!!!!! I already called Suzuki about transferring warranty  All they need is VIN and milage. 1-800-934-0934
VERY COLD A.C. Airbag Deactivation,Multi-Function Steering Wheel,Dual Air Bags,Anti Theft/Security System,Auto Express Down Window,Anti-Theft Device,Traction Control System,Child Safety Locks, Electronic Brake Dist,Electronic Stability Control,Tire Pressure Monitor,Vanity Mirrors,Air Conditioning,Power Steering,Power Door Locks,Power Windows,Tachometer,Clock,Rear Window Wiper,Privacy Glass (Tinted windows) ,Beverage Holders,Anti-Lock Braking System ,Intermittent Wipers,3 Point Rear Seatbelts,Outside Temperature Gauge,Power Outlets,Reading Lights,Rear Window Defroster,Power Mirrors,Roof Rack,Rear Center Armrest,Center Console,Door Pocket(s),Folding rear seats,Daytime Running Lights,Auto Headlight Delay,Front Wheel Drive,Bucket Seats,Adjustable Head Rests,Cruise Control, Alloy wheels, does not have 3rd row seat, but it is 3rd row seat compatible, 5 Speed automatic transmission W/manual shifting option. I added the "no blind spot" bubble mirrors on the side mirrors.
Comes with Towing package- Hitch, ball holder and ball included!  3500lb towing capacity!
Comes with brand new, new Stealth Windshield wipers!
Only thing wrong with this car, is that there is a 2-3 inch crack on the back bumper
Oil changed regularly, Looks & drives great, New tires bought beginning of 2012 (have paperwork to show and I bought lifetime alignment, road hazard, etc.  Just bought new battery, Non-smoker, Driver seat has minimal wear, all other seats like new, Very clean interior, Maintained very well.  Selling cause I upgraded to bigger boat.
---I have Carfax report