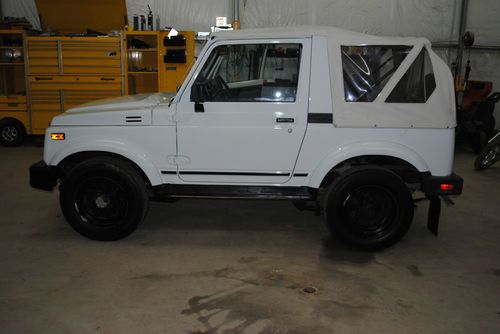 i got this on a trade for a trailer i had. its an orginal unmolisted 1988 samurai. it has 0 rust,new tires and new factory carpet. it appears to be orginal milage,but no way to verfy,except for its conition. there were no dents,never been in a accident,o rust,engine looks new and runs great. it doesnt use any oil or smoke. there are no oil leaks at all. the paint was duel so i had it repainted its orginal color. i spent 1500 dollars on the paint job alone its clear coat base coat,and looks better than the day it was new,even painted the door jams.this is probably the nincest stock orginal truck on ebay,pictures dont do it justice.everything works as it should,it even has the factory calorion radio,which works.all lights work fine.the tires including the spare have about 300 miles on them. the only bad is a tear in the drivers seat,and the top has some scrapes over the passanger door,nothing bad.had the bumpers repainted also.the top is in realy great condition for its age no tears or rips,windows are clear. someone realy took good care of this suzuki. doesnt look like its ever been off road. if you are looking for a stock nice suzuki this is it.i will start the bidding at 2500.00 dollars no reserve so if you bid you will buy it.i need a 500 dollar depoist within 24 hours,remainder in 7 days. if you cant do this than dont bid.it you have 0 feedback email before bidding. if you have it hauled you are responable for arrangements and cost. i can hold truck as long as you need to secure shipping so you can shop around for the best deal,or you can fly in to knoxville and drive it home.shipping can run anywhere from 300 to 800 depending on where you live, you will have to make shipping arrangements on your end.its getting new right front blinker,and the right lower body moulding that goes under the door and connects to the flairs (missing in pictures) as it was damaged by the body shop when it was painted,they will be installed before auction ends. i do have title in hand and ready to transfer to the new owner.im hard on grading but would rate this truck at 9 ought of 10 almost as nice as the day it was new ,no disapoinents. will add pictures monday,as i was raining today,so put it on your watch list to check it out tomorrow aftrenoon.this truck is available for inspection or test drive anytime if you live close by. just to let everyone know there was no dents or even scratches before the repaint,it was just dull.i also have a new battery hold down strap,so ill be removing the bunji cord holding the battery down in the pictures.it does need a new tailpipe as it is rusty indicating it has sat for long periods of time

it was recently serviced with new cap,rotor,spark plug wires,plugs, and oil and filter and new air cleaner.i have all the fender emblems and tailgate emblems,they are in the glovebox

i just found he orginal owner. his wife bought it off the showroom floor new in 1988, so this is the orginal milage.his wife died 7 years ago and sold it to my friend where i got it.he also had the orginal rear seat with the seat belts,so ill install it by auction end. he assured me she was the only driver of it and it had never been taken off road. this explains the trucks overall excellent condition. cant get much better than this.he also is the one who put the new tires and a new battery in it,and serviced it.this work was performed at the suzuki dealer

had a few questions about ac,if you want ac you can go to a junk yard and for 150 to 200 get everthing off a geo tracker to have factory cold ac,if your instrusted in this i can locate the parts for you