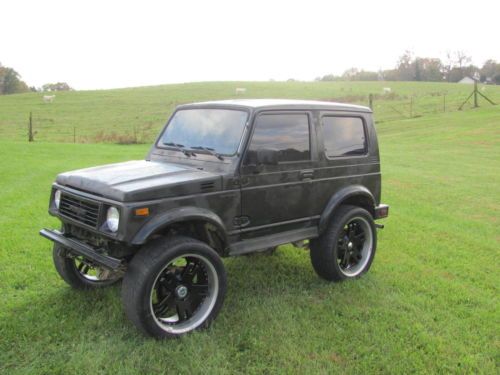 It's with some sadness that we present to you the Suzuki iV-4 Concept - there's absolutely no way we'll ever see a production Suzuki based off this conceptual design in the States, despite the fact that the brand has quite a small-SUV heritage on our shores. Of course, we won't be seeing any new Suzuki passenger cars or trucks in the US at all...
For the rest of the world, Suzuki's push with this concept is personalization. According to the automaker, the name is broken down as such: "i" stands for "individuality," "V" for "vehicle," and "4" for "4 wheel-drive." A tad convoluted, perhaps, but we'll roll with it.
As far as its styling, the iV4 doesn't break any new ground for Suzuki, recalling its past and current production models with details that include a clamshell hood and a five-slot grille. Suzuki promises a production variant of this concept, and the "individuality" part will be accomplished through a selection of exterior components, colors and textures, though we're not clear what exactly that means or how it will differ from the accepted practice of ordering a unique car through a dealership.