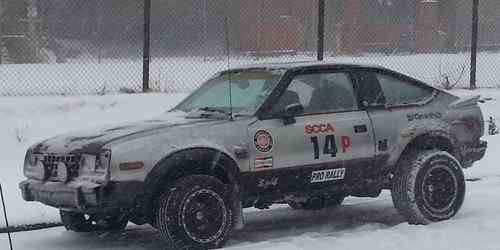 1981 AMC Eagle SX4 with a 6cylinder engine. Equipped with non-switchable 4wd transfer case though I do have a switchable NP229 (full-time high, part-time low) available should the buyer be interested. Always a conversation starter and got me through deep snows climbing up the mountains this winter.

Hatch area carries a full size spare tire, and standard AMC Eagle jack/tire change kit. Due to the spoiler, hatch unlocking is accomplished with an electronic actuator (solenoid) with control push-button installed in the glove box.
Car drives well though has some mechanical issues as you'd expect with a regularly driven car of this age. Interior needs work, mainly cosmetic - needs new headliner, passenger side sun visor needs to be replaced, etc. Radio has an intermittent connection - head unit is fine, I'm pretty sure there is loose wiring somewhere near the rear of the car which cuts out the speakers (I'll update the description if I identify and fix the issue before auction end).
Front seats are not the greatest - have seat covers on them. Rear seats are good, fold down ok.