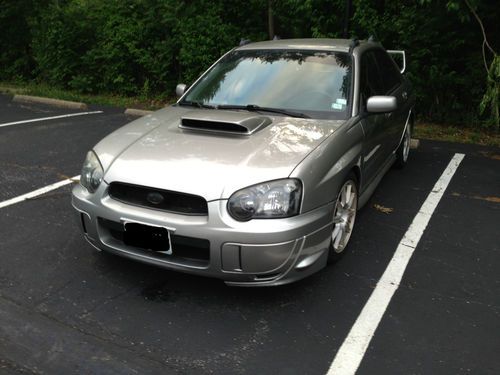 Hello everyone. The time has come for me to sell my toy. I will be going to school full time at a commuter school so I need something with better gas mileage. I love this car and I hate to get rid of it. I've owned it for almost 2 years and it's been a lot of fun to drive.

If you're looking for an STI, I can only assume that you know how much fun this car is so I will skip all of the technical jargon.
As you can see the car has a little over 100,000 miles on it. I just had the timing belt and pulleys replaced, along with the spark plugs and head cover gaskets. I had the work done at the local Subaru dealership. As far as any mods done to the car, it has a drop-in K&N filter, aftermarket BOV, and Mishimoto aluminum radiator. I also installed a COBB exhaust which I bought from a guy on a Subaru forum. He sprayed it black but as you can see from the picture, it has started to peel. There is a boost gauge installed from the previous owner. When I purchased the car it was already lowered with Tein springs. Also, as you can see from the picture I installed a custom Yakima bike rack. The towers are permanent but I am including the crossbars.
The car is in really good shape. The body does have some small dings. This car was my daily driver and with it being lowered the front does rub.
Good luck!

Subaru is going to have its hands full at the Tokyo Motor Show next week, but while the Cross Sport Design Concept is expected to preview a Tribeca-replacing crossover, this new model could still be at least two years from production. It has already been confirmed that production of the Tribeca will end early next year, but in speaking with Yasuyuki Yoshinaga, the president of Subaru's parent Fuji Heavy Industries, Automotive News is reporting that there will be a lengthy gap between the Tribeca and its eventual replacement.
The next-gen three-row crossover wasn't included in an annual production capacity goal of 500,000 units expected in the US by the end of 2016, so it's likely that we won't see this much-needed CUV until 2017. While the details of this new model aren't known, Yoshinaga told AN that it will be "completely different" from the Tribeca. As we heard back in February, we do expect this seven-passenger crossover to grow in size in order to offer a larger cabin with more third-row space.
Automotive News even mentions that the Tribeca replacement could be based on the existing Subaru Exiga from the Japanese market. That three-row vehicle splits the difference between a minivan and wagon, with swinging doors instead of sliders, and a tall greenhouse.