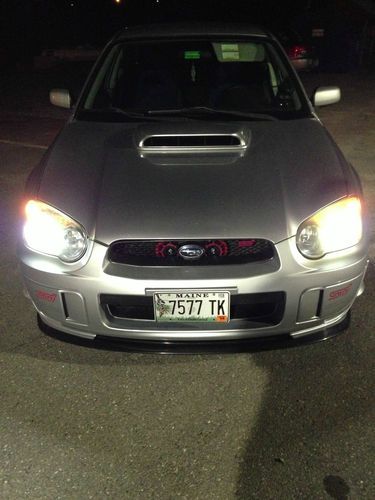 2004 Subaru Impreza WRX STINew Factory turbo with 4,000 miles on it4 New Toyo Proxes 4 tires with 3,000 milesShort throw ShifterTein fully adjustable coil over suspensionAftermarket ClutchBlowoff ValveStage 2 modificationsSPT IntakeInvidia 3" turboback full stainless systemRally Armor UR Mud FlapsGreedy Turbo TimerAlpine head unit, along with alpine aftermarket speakers. Currently has 2 12" subwoofers but those can easily be removed if desired.Tuned on cobb accessport to stage 2 91 octane, about 365hp and 370 tq.Car has been well taken care of, no rust, new belts, new timing belt, new pulley, everything is up to date. Oil Changes, full synthetic every 3k. Body is in very good shape, hasn't seen a full maine winter.can provide more details and pictures upon requestclean title is in handselling because Im moving to Boston, no longer need a car

Subaru fans, get your clicking fingers ready - the configurator for both the 2015 WRX and the WRX STI are live on the company's consumer website.
With three trims of the standard WRX and two of the WRX STI available, customers can price out their ideal rally rocket. Aside from choosing a trim level, there's not a whole lot for dreamers to do here. A single interior trim (black) can be paired with a decent spectrum of colors. Each trim level only comes with one optional package, which ranges from $2,000 to $2,500 and includes some combination of navigation, a Harmon/Kardon stereo or push-button start. There are also a number of dealer-installed accessories available, as well.
Hop on over to Subaru's US consumer page, and start building your perfect road-legal rally car.