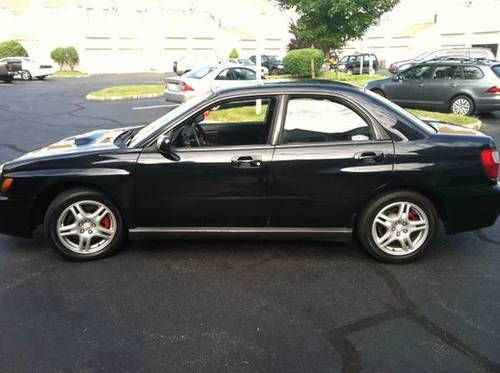 Car has a factory short shifter, new Exedy Stage 1 organic clutch (installed at 110,00 miles), had all its services (water pump and timing belt) done at 105,000 miles.

**Brakes were just replaced because I had a spare set around and figured it could enhance the car for the new owner.

I am the second owner of this car. Minor rock chips/scratches in hood as it was a commuter car for the first 100,000 thousand miles of its life, basic wear. Recently somebody decided to key my hood quite badly, but its barely noticeable with some wax on the car. No rust at all. Amazing driving in the snow and the rain, very safe, and tires are new (only 10,000) miles on them. Brakes are painted red just for looks. Car was also Rhinolined underneath and in wheel wells to protect the underbody. Exhaust is custom, done by my mechanic at Long Hill Auto and sounds good, nice rumble from the boxer engine.

Exterior could use work but it was a city/ commuter car before I owned it and it shows in some areas. but I do not have the time to give it the care she deserves, but this car has major potential.
Interior is 9/10, only the cup holder is broken, but still functions. Has aftermarket shift knob as well.
Engine was fully serviced and cleaned/ painted to make it look nice and the paint is heat rated for engines. All service when I owned the vehicle was done at Long Hill Auto

Looking to get $7500 for the car, slightly negotiable. I know what the car is worth, no low ballers. Don't bother offering thousands less than what the car is worth, you're only wasting your own time. Shoot me a reasonable offer, worst I can say is no. I do have the CARFAX report and KBB value sheet already. NO TEST DRIVES WITHOUT CASH IN HAND, MUST BE ABLE TO DRIVE MANUAL PLEASE!
***STICKERS REMOVED***