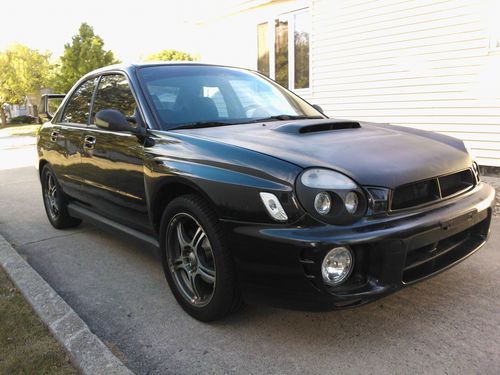 You are bidding on a 2003 Subaru Impreza Wrx. This car has very low miles for a 2003 with only 73,370. I bought this car as a project back in April but now with a baby on the way I will not have time for it. Mechanically this Subaru runs great, I can't seem to find anything wrong with it. I just put a new battery, new rotors and pads on it. The biggest thing about this vehicle is that it does need a paint job. The hood look like it was primered at one point but never recieved a paint coat. The clear coat it flaking and wearing off on the front bumper and roof. Also there is paint chipped off on the drivers side rear quarter panel. This Subaru does have tint on the windows, but is bubble up in a couple places and faded. Also, the passengers side headlight has a cracked lens. As much as it seems like a lot of work for this car it really is not. A new paint job would do this car wonders! As for the interior, it is in good shape. This car does not have a radio in it as you will see in the pictures. Also, the back seat has some kind of stain on it. Outside of that the interior is in good shape. This Subaru will come with the factory wheels and taillights as well. If you have any questions please feel free to ask. Thanks for looking and happy bidding!!!

There will be many automakers spending millions upon millions of dollars advertising in the Super Bowl next weekend, but Subaru will not be one of them. Instead, the automaker will be catering toward animal - specifically dog - lovers with a set of commercials for the 2014 Subaru Forester that will appear during Puppy Bowl IX on Animal Planet.
The ads all build on Subaru's reputation of being a dog-friendly brand, and its latest "Dog Tested. Dog Approved" campaign will feature four 20-second spots. Of the four, "Tailgate" and "On The Lot" are definitely the most entertaining, while "Let's Talk Financing" and, especially, "Lint Roller" are snoozers.
Scroll down to watch all four spots, and there's also a press release listing other initiatives Subaru is planning to attract dog lovers. If you like dog commercials, you should check out the newest spot from Volkswagen, too.