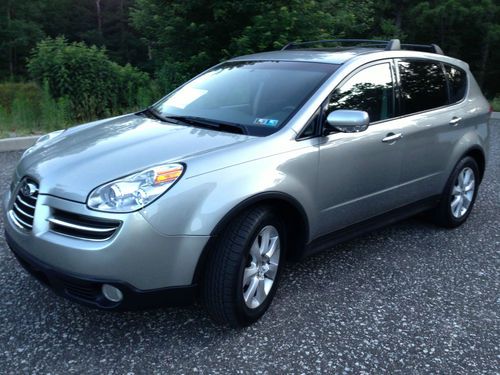 Condition: Used: A vehicle is considered used if it has been registered and issued a title. Used vehicles have had at least one previous owner. The condition of the exterior, interior and engine can vary depending on the vehicle's history. See the seller's listing for full details and description of any imperfections. ...
Hi, I have 2006 SUBARU Tribeca B9 for sale with 122000 miles.
This car looks like brand new. It doesn't have even one scratch on the paint. It drives excellent.
Engine sounds great and transmission shifts smooth. It is a beautiful looking SUV.
It has symmetrical all-wheel drive, which provides a comfortable ride and you don't have to worry about snow whether later on.
It is fully loaded too. It has power windows, power locks, power mirrors, auto diming mirror, 6 disc cd changer in dash, dual air conditioning, power heated seats,
leather seats, sunroof and much more. Interior looks like it has never been seated; leather seats look like brand new too.
Tires are almost brand new too.
From out of 10 I would give at least 9.9 for this SUV.
It is used car so, it might have one or 2 imperfections. It still has current PA inspection on it. AC blows ice cold.
I have clear title in hand ready to transfer.  . Thank you
_____________________________________________________________________________