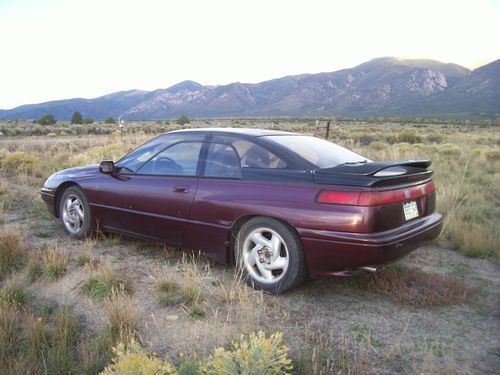 92' Suabru SVX  Clean Colorado Title.I think it is LSL, but could be LS No sure. Has all the bells and Whistles. Runs and Drives Good!! 131357 miles. Needs battery( Can Be Jumped) and Transmission pan Gasket redone. Someone changed filter and did not get Gasket pan right. I fill up Transmission every couple months and drive the car around for a couple days since she has been sitting. VW Project or Fix and Drive! I would haul this car on trailer if taking long distance. I think the car runs Great! My wife and Mother-in Law do not like the car, So time to sell. We was offered $800 for the engine, so we will sell for $800 or Highest bidder for the whole Car. Couple dents and dings. Faded Paint. Perfect Engine for VW Project. No Reserve! $250 Deposit! Buyer must pick up. No Delivery!Please Ask Any Questions!

Check out my other items!

As you read these words, we're putting together our full First Drive report on the 2015 Subaru WRX STI. And back in December, we were given our first shot behind the wheel of the wingless 2015 Subaru WRX. Both cars will launch at the same time, hitting dealers this spring, and Subaru has now confirmed that pricing will start at $26,295 for the standard WRX, and $34,495 for the hotter STI, with both models subject to a *$795 for destination fee.
On the WRX, that price gets you a 2.0-liter turbocharged four-cylinder engine good for 268 horsepower and 258 pound-feet of torque, mated to a six-speed manual transmission. There are three trim levels available - base, Premium and Limited - the latter of which will retail for $28,495 and $29,995, respectively. Premium and Limited models are also available with a new continuously variable transmission (it isn't bad - seriously), and the two-pedal setup adds $1,200 to the sedan's bottom line. Premium models add things like heated seats and mirrors, a sunroof, foglamps and a rear spoiler. The high-zoot Limited trim adds leather seating, a power driver's seat and automatic LED headlamps.
And then there's the STI, which, at $34,495, carries the same base price as the previous model. Like the standard WRX, the STI is a sedan-only affair, but boasts extensive chassis and powertrain upgrades (stay tuned for our full drive report next week). Under the hood is a turbocharged, 2.5-liter boxer-four, producing 305 hp and 290 lb-ft of twist, mated exclusively to a six-speed manual transmission.

Power Doesn't Come Cheap
When Subaru first offered a turbocharged Forester XT model to US customers for the 2004 model year, the shoe-shaped second-gen model fell into a ready-made competitive set of small, V6-powered crossovers and SUVs. The XT might have been more of a raucous shopping-trip companion than, say, a Ford Escape V6, but the basics of the cars offered a clear differentiation from the naturally aspirated, four-cylinder models found just a bit downmarket. Here in 2013, the V6 breed of crossover in this size class is all but extinct, and turbocharged four-cylinders with the power to compete with the XT are not thick on the ground.
In many ways, the comparative analysis gets most interesting when you start looking around for CUVs to match up with the all-boxes-ticked Forester XT Touring that we had as a tester for a recent week. The top of the line Touring trim means that the Forester comes with features like 10-way power seats, leather, navigation, a Harmon Kardon sound system with HD radio, Bluetooth and more. In fact, our Forester also had the only option package available on the XT Touring; one that included keyless access, HID headlights and Subaru's EyeSight system (adaptive cruise, lane departure warning and pre-collision braking).