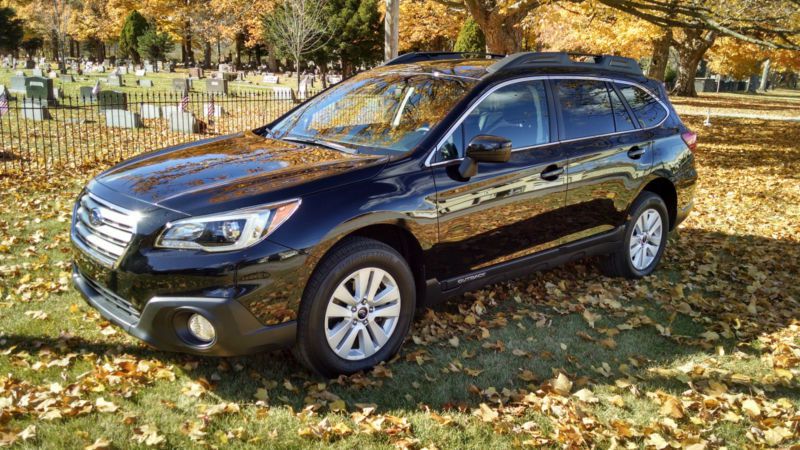 ANY QUESTIONS JUST EMAIL ME: sungsmmartelli@welshhome.net .

This wagon has many factory extras including Option Package 11. This includes heavy rubber mats throughout, front, rear & cargo area including rear seat backs. This also includes heavy front seat covers with headrests all designed for the outdoor enthusiast, ie; hunting, surfing, skiing etc. These covers have not been used. There is also a full carpet floor mat set, front & rear, still wrapped new. Look on line with Subaru to see all the particulars.

The electronics are really nice with a wonderful sound system and Bluetooth set-up. It also has CD, 3.5 plug in for media, 2 USB's. The phone Bluetooth is quit amazing, sounds better than any car I have used, with auto sound dimming when a call is activated. The electronics also include a "Porsche-esque" 6 speed +/- paddle wheel shifter that is very slick, never having to take your hands off the wheel.

The interior and exterior are very aesthetic and well designed, very pleasing to the eye. The color is Crystal Black Mica Metallic with a rich sheen, especially in the sun. The interior is a graphite woven cloth with heated seats, very rugged and attractive. The mirrors and wipers are also heated. It gets 28 mpg/34 mpg highway which is awesome. Tires, like the rest of the car are new basically.

Subaru has pulled the covers off its 2015 Legacy Concept before the car's debut at the LA Auto Show next week. The sedan trades in its relatively staid styling for a more aggressive, coupe-like design that almost makes us forget about the rear doors from some angles. Overall, the Legacy looks beefier than your average Subaru, similar to the Ford Taurus.
The concept's character line stretches all the way back to a small trunk, which helps the car achieve its coupe-like appearance. But the front end makes the biggest impression, with "hawk-eye" headlamps and a gaping hexagonal grille with three horizontal slats. The taillights have a shape similar to the headlamps to "enhance the solidity of the overall design," Subaru says.
Custom paint called Ocean Silver Metallic adorns the concept, which sports 21-inch wheels under bulging wheel arches that Subaru says hints at the standard all-wheel-drive system (the BRZ is the only two-wheel-drive Subie).

"As far as street-legal rally cars go, there's still nothing better than a WRX." I wrote that line following my first drive of the 2015 Subaru WRX late last year - one of the better motoring experiences I had in 2013. Sure, a particularly involving drive route helped, but I don't want to sell the new Subaru short: it's a seriously good car - easily one of the sharpest, best-driving little turbos available today.
When I drove the even hotter 2015 WRX STI in January, it was a similar love-fest. The STI is infused with all of the WRX's greatness, but it's sharper, meaner, and on good roads (and race tracks), the winged wonder is really outstanding. But because of its higher price tag, less forgiving suspension tuning, and only marginal performance increases, I'm convinced that the STI isn't the best WRX for the money. And much as I love it, I just don't think I'd ever buy the STI over its more sedate sister (though I totally understand why others might).
So when it came time to add a new long-term car to the Autoblog fleet, many votes were cast in favor of the WRX. There was a lot of debate about whether or not to get the standard version, or the mightier STI. But at the end of the day, my argument that the basic WRX is the better daily driver - nee, one of the best all-around, all-weather performers money can buy - carried the day.