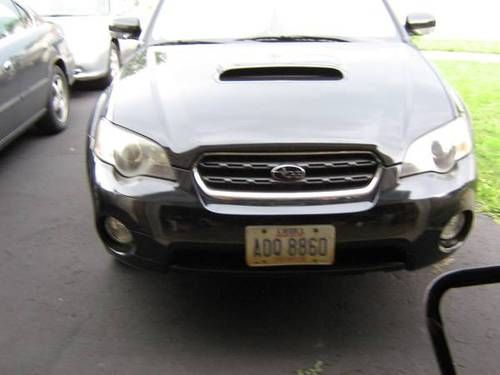 Condition: UsedA vehicle is considered used if it has been registered and issued a title. Used vehicles have had at least one previous owner. The condition of the exterior, interior and engine can vary depending on the vehicle's history. See the seller's listing for full details and description of any imperfections.Seller Notes:"some very slight scratches very minor dents from parking lots interior black charcoal leather in near mint condition still smells new"

2005 Subaru Outback Limited XT Turbo Wagon 4X4 I have $13500.00 in car over $7000.00 in receipts Just got out of shop last week. This Vehicle also has 3 year ASC warranty witch is transferable to new owner and also has the factory warranty on the parts that were replaced 1 Year or 12k miles on all new parts New Turbo and Short-Block New Water Pump and Timing Belt Kit with all pulleys and Tensioners New Oil Pump New In Line Turbo Cooling Line with replaceable in line Filter. New Battery.New Clutch & Fly Wheel .RARE RARE car Black With Black Charcoal Leather in Like New Condition. 5 Speed Manuel Trans 137K Mileage on car.Retailed in 2005 for over $32000 Body Has No Rust. Factory Aluminum Hood And Tail Gate .California Car for several years as stated on car fax. Super Clean.With New 250 Horsepower Factory Engine .I Have the Original Window Sticker & Owners Manuals.Very Nice 17 Inch Aluninum Rims with Bridgestone Tires with Low Miles on them Also has Cargo Cover and Cargo Mat and All Seasons Floor Mats.Huge Sunroof. Ice Cold Air conditioner. With Clean car fax. Sorry about the date on the one old picture the rest are recently taken.I have all recipts of the work done at Covert Tunning Diagnostics in Lewis Center Ohio.