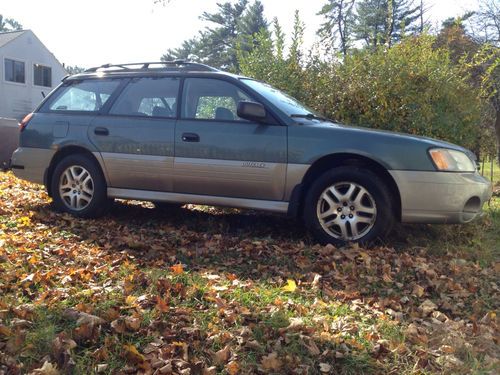 This one runs pretty well, but has some issues.
Head gasket has had a very small drip onto the right side headers for years with no progression. There is no oil in the coolant or coolant in the oil, but if parked for many days, it will smoke a bit when the headers heat up. As a result I've only taken it out when there is water on the ground since the Fall when I got a new truck. It would be best to do the headgasket now-ish. Needs a new timing belt soon anyway, so...
New rear lower control arms two years ago. New rear brakes at the same time. Maybe 10k miles since. Will need new front brakes soon (runout is at the limit for spec and there is a mild shudder when braking at speed.)
Patched minor holes over the wheel wells. Everywhere else is solid with a few tiny spots in paint. No rust on roof, rest of body, etc. Body is in great shape and car feels very solid on the road. Engine light is ON--OBD codes say "small vacuum leak" (yes there's a code for "small" vacuum leak). I had it smoke tested once and they couldn't find it. It is most likely due to the aftermarket cruise-control plumbing and will most likely disappear when the engine is pulled and reinstalled for the headgasket job. Also, the exhaust can snapped at the rear gasket. The mid-pipe/cat is perfectly fine; the pipe to the exhaust can itself is what broke. I jerry-rigged it but it doesn't sound wonderful and the exhaust can will need to be replaced.
Bunch of other stuff has been done to keep it running. I'll update later when I'm in front of my books. I wanted to get this up now because it is due for inspection at the end of March and will not pass.
Sold AS-IS, but at a song. This is a fundamentally sound car. Tires are good. If it gets to $500, I'll throw in a full set of snow tires for it in excellent condition.
This would be a great bargain for someone who can do the work themselves, or even if you need to pay to have it done. Great,. safe car for a student, ski bum, camper, etc.
Questions? Send me an email through eBay and I'll let you know ASAP or send you my phone number.

WRX Concept styling may transfer to production Impreza, next WRX

Remember the original concept that previewed the latest generation Subaru WRX? If not, then just look above for a gallery of photos following its debut at the 2013 New York Auto Show. We loved it, and thus, were sort of disappointed when we first saw the less-aggressive production model.
It's not that the production 2015 WRX is ugly, per se. It just doesn't have the gaping grille, four-door coupe lines or squinting headlights that give the concept so much verve. But as it turns out, Subaru might have realized that it was on the right track with the more assertive styling. Rumors coming out of Australia suggest that the shape could form the basis for the next-generation Impreza, and next WRX, along with a major platform shift.
Subaru chief designer Mamoru Ishii tells Motoring that that the next-generation car will ditch the rather utilitarian current design in favor of something more exciting. Like the WRX concept, the design will start wide at the bottom for an aggressive stance and taper up to the roof. That styling would likely get even more aggressive for the next 'Rex.