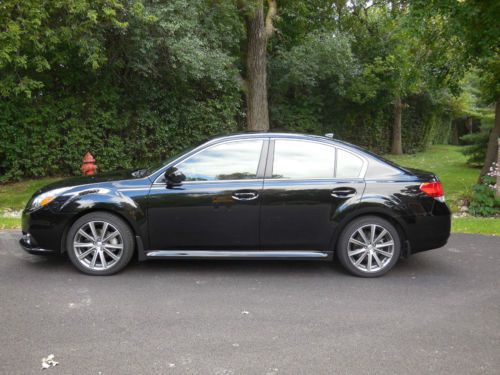 For a company that does a pretty great job of tying its vehicles to the environment - or, better said, to people who like to actually get out into the environment - Subaru hasn't exactly been a leader in green vehicle production. In fact, it's 2013 and the company is finally releasing its first-ever production hybrid, the XV Crosstrek Hybrid. Tom Doll, Subaru's executive vice president, admitted as much at the unveiling today at the New York Auto Show: "We at Subaru were not the first to market with a hybrid, but we sure made sure we did it right."
That may be, but for now the automaker doesn't want to tell us all the details of how right it is. We do know that the powertrain takes Subaru's 2.0-liter boxer engine and adds in a 13.4-horsepower electric motor and continuously variable transmission. All-wheel drive will be, of course, standard, and Subaru promises the XV Crosstrek Hybrid will offer the "same utility and versatility as the gasoline model," including 8.7 inches of ground clearance. The hybrid does weigh 300 pounds more, though, which required a re-engineered chassis.
The motor can move the lifted Impreza in all-electric mode up to 25 miles an hour (distance not specified). Subaru isn't talking precise fuel economy numbers, either, just that it will be the "most fuel-efficient all-wheel-drive crossover in America" and will unsurprisingly have start-stop functionality. We do hear, though, that the hybrid will get around 10-percent better fuel economy than the standard gas-only XV Crosstrek. The most efficient version of that car, the one with the CVT, gets 25 miles per gallon in the city, 33 highway and 28 combined. Whatever this hybrid XV Crosstrek gets, we expect Subaru'll sell a million in Portlandia. For more, scroll down to watch an official video and read the press release.