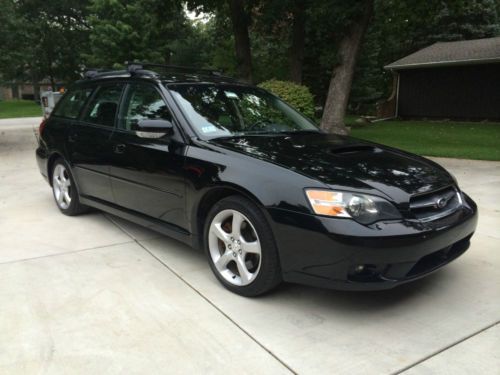 Despite my best efforts to convince myself otherwise, I think I'm finally getting too old for this car. I remember the days when I would go ga-ga over the winged Subaru WRX STI sedan, my inner boy racer caring only about its turbo thrills and not taking into account things like price, packaging or interior quality/comfort. Even now, as someone who generally appreciates offbeat color choices, I'm having a hard time getting behind the Tangerine Orange paint of this Special Edition tester, a unique version of the STI sedan limited to just 100 cars. (West Coast Editor Michael Harley recently spent time in the Special Edition WRX sedan, which will see a production run of 200 units.)
To give it The Full Halloween, this limited-edition Subie comes with black accents on its mirrors and fender badges, not to mention black alloy wheels and special graphics on the rocker panels. Special Edition cars also come standard with foglights, and there are orange accents found throughout the interior. All in, this flashier Subaru will set you back $34,795 plus $700 for destination, or $500 more than the standard version.
No, $35,000 isn't chump change, and many will argue that there are far better vehicles to be had at that exact same price point. And while my aging brain is beginning to think more toward that side of the rational thought spectrum, there's still a lot about this car that makes my more youthful self endlessly happy.

Subaru has produced its four-millionth vehicle at its Lafayette, Indiana factory. The Deep Indigo Blue 2014 Outback is pictured above, alongside the very first Subaru to leave the Lafayette facility, a first-generation Legacy. Formally known as Subaru of Indiana Automotive, SIA opened its doors in 1989 and currently produces the Outback, Forester and Tribeca for Subaru, in addition to the Toyota Camry.
The plant, which was originally a joint venture between Subaru and Isuzu, has produced nine different models for four different manufacturers over the years, and is getting ready to add a tenth as Impreza production will be coming to SIA. Subaru announced plans to move Impreza production to Indiana when it made a $400-million investment in the facility earlier this year. As production continues, the Lafayette Journal-Courier reports that SIA will produce another million units by the end of 2017.