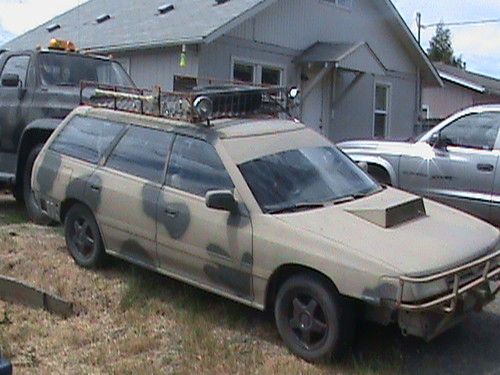 Condition: Used: A vehicle is considered used if it has been registered and issued a title. Used vehicles have had at least one previous owner. The condition of the exterior, interior and engine can vary depending on the vehicle's history. See the seller's listing for full details and description of any imperfections. ...
THIS ITEM IS LOCAL PICK UP ONLY AND WILL NOT BE SHIPPED
Title Brands TOTALED/RECONSTRUCTED

Meaning the drivers side passenger door and drivers side front fender have been replaced. No other damage to the car occurred but the cost of those two items being replaced were 'theoretically' worth more than the car at the time.

Car has no fluid leaks and would be trusted to be taken anywhere anytime.

The car has lots of custom items...

Front bumper/brush guard with the small trailer receiver and the capabilities to be towed with the tow bar that is included.

The car has a rear 2" receiver/hitch that will be included but not installed for legal reasons. The car does tow trailers well.

The shifter was replaced by welding an antique wrench on the linkage. Works well and gives the car some off road/rat rod flair.

The rack is light weight and very strong. I personally have hauled a complete 4cyl car engine on it before and lots of lumber as well as other odds and ends. It is mounted by 4 bolts through the roof of the car, no leaks have been detected so far.

The rack has 2 off road lights that still need wired up.

An extra 3rd row seat that seats three will be included with seat belts but will need to be re-installed by you after purchase. Should be used off road only as should the 2" hitch :)

The car gets about 25 mpg

It is a fuel injected 4cyl. with a 5 speed. Runs good and gets down in the woods. Holds the road like it's on rails.

Tires are useable but will need replaced soon.

Car was painted about a year ago using Rustoleum Camo Khaki pain and Rustoleum Camo Green paint giving it a sand car appearance. Car also has no sun visors but a banner of paint has been added to the windshield and could be removed with a razor if desired.

Any questions you may have should be asked and answered before bidding as all sales are final.

The National Highway Traffic Safety Administration announced a massive recall campaign today for some of the more popular Subaru models due to defective puddle lights that could short out and possibly lead to smoke and/or fire.
(*)While the recall notice lists a total of 633,842 Forester, Legacy, Outback and Tribeca models from various model years, Automotive News is reporting that there are only 53,999 units actually equipped with the defective lights, but Subaru is having to make the massive recall since it is unable identify which vehicles have the lights.
The problem with the 2009 through 2012 Forester, 2006 through 2012 Tribeca and the 2010 through 2011 Legacy and Outback is that the puddle lights mounted under the door mirrors can collect water or moisture, which can lead to the short. To fix the problem, Subaru is adding an extra fuse to the wiring harness as a part of the recall that will go into effect next month. For Forester owners, this is the second major recall in less than a year following the 275,000 units that were afflicted with faulty rear seatbelts.