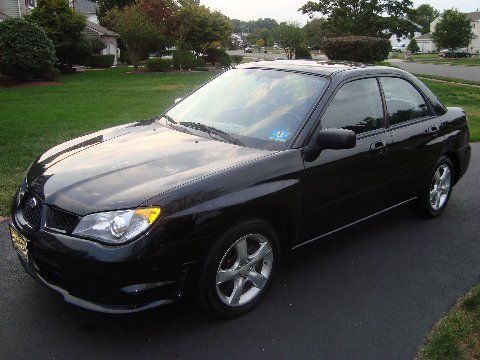 Amazing deal on my Subaru Impreza
I am the only driver that this car has ever had. Originally I leased it in 2006 and then loved it so much that I bought it after the lease a few years back. It has been a great car to own and drive.  I am not parting with it that easily, but I purchased a truck not to long ago because I needed the the third row seating. However my truck is a gas guzzler compared to this car and I'm going to miss the sporty acceleration this car has as well.
This car is in excellent condition both outside and inside and under the hood. I take pride in ownership and have never missed an oil change or tire rotation. I always feel safe when driving it in any weather because of it's great safety record and because it handles beautifully in any condition. It has a very sporty look, but also makes for a great commuting or family car.  The engine purs and it's accelerations from 0-60 is really nice. The braking system is very responsive and I could stop on a dime. All the seating is comfortable and not crammed. There is plenty of trunk space. The engine feel like it's brand new because of the condition I have kept it in.
The insurance for it is much less then my truck so I really wish I didn't have to let go of it. I will only consider fair offers on it and a good home :-)
In this condition the car is worth around $8500 but I'm willing to let it go for a fair price to right bidder. Look it up on Edmunds and Kelly Blue Book and I think I'm looking for a very reasonable offer.
Feel free to message me with questions and I encourage you to come inspect the car in person before you bid if you can.
I am only accepting cash and the transaction will take place at my local bank. Also I will not transport the car you will have to meet me by the local bank. If you want to have the car inspected with your own mechanic please arrange for that before the bidding ends as this is sale is Final and I will not negotiate on price after the bidding is done.
Good luck!

Subaru Legacy Concept has us getting our hopes up

It happens all the time. We get excited about a really attractive Subaru concept, and then the production car comes out and, well, "disappointed" isn't a strong enough word. (Compare that hot Impreza concept to the final production car.) So while we're hopeful that this new Legacy concept previews something sleek for Subaru, allow us to be fully on record as not getting our hopes up.
Anyway, let's talk about how good this car looks. From the front, comparisons to the Buick Regal GS are warranted, but from all other angles, it has a very four-door coupe-like shape. The concept rides on 21-inch wheels with bulging wheel arches that Subaru says hints at the car's all-wheel-drive system (standard Subaru fare, BRZ aside).
As for what exactly this concept previews, the safe guess is, of course, the next-generation Legacy midsize sedan. And while we'll keep our fingers crossed for a sweet-looking production sedan to come out of Fuji Heavy in the near future, it's safe to say we're still skeptical.