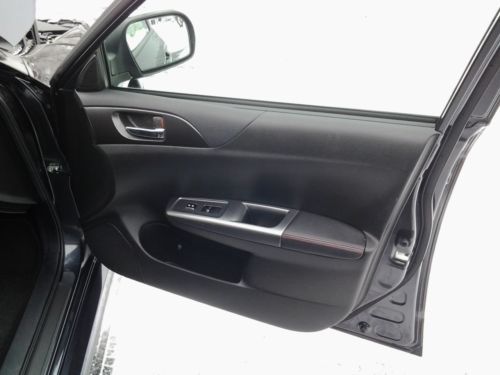 Subaru has been busy testing the next-generation WRX STI. Well, it may be the STI. The big wing out back lends some credence to that theory, but it could be that the basic WRX is getting new action in the back section. Time will tell.
In either case, spy photographers nabbed a few shots of the heavily camouflaged sedan running around the Nürburgring. Unfortunately, it looks as if Subaru has taken some of the sexy out of the WRX Concept we saw at the New York Auto Show, leaving this car looking more derivative of the current model than a revolution in design. The bold power bulge has disappeared from the vehicle's hood and the lower fascia looks far more demure than the the wild concept. Likewise, the muscular rear fenders have been toned down substantially.
The result is a car that looks more like a mildly warmed over version of the current model than a production version of the WRX Concept. Still, engineers and designers may have a long way to go before the finished product hits the market, so we'll reserve final judgement for now. After all, the early BRZ mules were nothing short of a travesty to look at, and we know how that turned out. Hope springs eternal.

Subaru has made another trip to the infamous Isle of Man TT, bringing along its all-new 2015 Subaru WRX STI. The goal? Best the already impressive time set by rally ace Mark Higgins and the 2011 Impreza WRX STI on the same swirling, high-paced ribbon of tarmac. Of course, you already know how that went.
What we didn't know when the story first broke, though, was that Subaru was monitoring data. Specifically, Higgins' data. He was fitted with a monitor that would record his heart rate, breaths, skin temperature and the g forces he was faced with as he lapped the 37-plus-mile road course. While Higgins and Co. were aiming to best their 2011 time (19:56.7), this year's effort also saw a push to beat the time of the sidecar racers.
You can get a recap of the entire event, with plenty of footage and data from Higgins' lap in the exhilarating video below. Take a look.