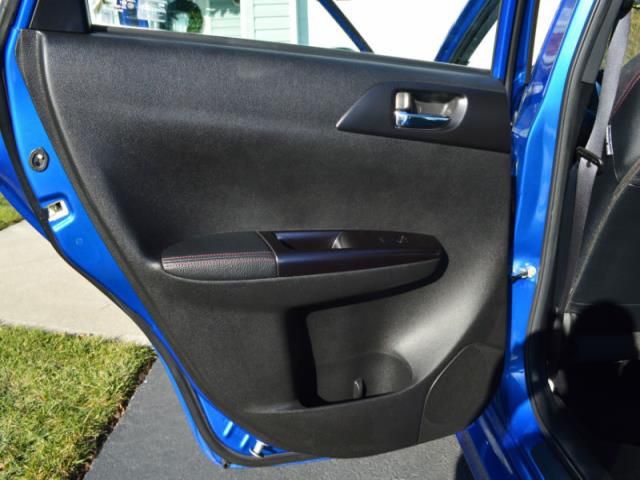 You are bidding on a one owner 2011 Subaru Impreza WRX STI in WR Blue Pearl. The car has 22,000 miles on it, is completely stock and has never been in an accident. A short-throw shifter and fog lights were factory installed and the all-weather mats are included along with the stock carpet floor mats. Never been smoked in and never raced or abused. The front bumper has a scrape on the bottom passenger side and a crack approx. 3 inches long. I had Continental ExtremeContact DWS Ultra-High Performance All-Season tires installed and this car handles like a dream in the snow or any weather condition. The tires have approximately 3000 miles on them and as seen in the picture, have plenty of tread life left. It has leather/alcantara seats and interior, 6 speed manual transmission, heated front seats, Bluetooth hands free radio, HID projector headlights, 18 inch wheels, USB port and auxiliary port for easy use iPods, etc. ***The car comes with Subaru's "Added Security Extended Service Contract" at 7year/ 100,000 mile coverage under the Gold Plus plan with no deductible.*** For more info on the extended warranty, visit Subaru's website. A down payment of $11,000 (for loan payoff) is required within 5 days after the auctions end. The balance will be due once the title is in my hands. The car is also being advertised locally, so I reserve the right to end the auction early due to the car being purchased outside of eBay. Please contact me with any questions. -------------------------------------------------------------------------------- On Feb-27-14 at 11:45:16 PST, seller added the following information: The loan I had on the car has been paid off and the car's title is now in my hands, so disregard the down payment of $11,000 within 5 days of the auctions end. Thanks