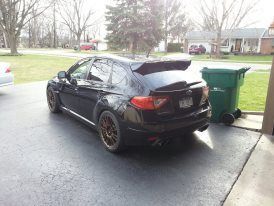 2008 Subaru Sti90,xxx miles on body40,xxx newer motor (replaced under warranty)Have receipts for most parts.CNT downpipeNameless MidNameless Axle Back. Also have Custom lightweight axleback(1.7#)AEM CAIbushings everywhere22 whiteline adj swaysEpic SpringsArch4life tunePTP turbo blankyGroup N motor/trans mountsDom 1.5xtr 10cmID 1000CC injectorsDW drop in FP 265lphPerrin inletTgv delete mod/tgv spacerair pump delete modFancy stainless braided avcs gt turbo line from P&LGS heat shield in case my customized stocker doesn't fitAnarchymotive shift knobNew brakes as of approx 8k miles agoturbosmart bpvWill come with E85 and 93 tuneCar has newer Hankook RS3's on it with freshly powdercoated wheels, also have a set of sti wheels with winter tires on them.Everything will come with the car for the right price, car has been well taken care of and worked on by a certified mechanic. I am sure I am missing something so feel free to ask questions.I keep very good care of this car.$25,000 without winter setup and new summer tiresWill trade: mainly looking for LS swapped vehicle, corvette, or Porsche, let me know what you got.Thanks,